The number of non-EU accountancy professionals coming to the UK jumped by 33% in one year, as skills shortages within the profession deepen, according to statistics obtained by SJD Accountancy, the UK’s leading contractor services provider.

The work permits were issued to non-EU accountancy and finance professionals filling a variety of roles. The most in-demand roles include chartered and certified accountants and financial accounts managers.

“With the economic recovery gathering momentum, the skills shortage affecting the accountancy profession is worsening, making employers increasingly reliant on foreign skills to plug the gaps.”

Number of non-EU accountancy professionals coming to the UK, 2010-14 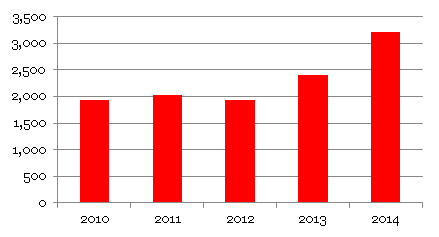 “Like many other highly skilled sectors, accountancy and finance is caught between the rock of a growing economy and the hard place of the retirement of the baby boomers, which means that the natural replacement rate is failing to keep pace with demand.”

He adds: “Part of the problem is that the larger firms cut back on recruitment and training during the downturn, leaving the wider profession facing a skills deficit. The Big 4 would typically churn out high quality candidates, many of whom would move on, but that pipeline has dried up significantly.”

SJD Accountancy says that accountants were focused on cost-cutting and reducing headcounts during the recession. The emphasis is shifting so that accountants with strong resource planning and change management skills are increasingly in demand as businesses grow, but insufficient numbers of the new crop of candidates have those skills.

Curry continues: “It isn’t simply a matter of the total size of talent pool, but whether the right mix of skills are available. A growing economy means that different skills become more highly sought after. People will have acquired experience during the recession that won’t necessarily stand them in good stead to advise growing businesses.”

“Finding the right technical skills usually isn’t the issue. Hirers typically list non-technical skills, such as change management, business acumen and leadership qualities, as those which they struggle to find in candidates. They are looking for the managers of tomorrow. A lot of the technical work is now done by computer software, which brings non-technical skills to the fore.”