1 in 3 Brits against Canadian BoE governor

Nearly a third (31%) of Britons say it is “unacceptable” for a Canadian citizen to be made governor of the Bank of England, reveals a new YouGov poll.

A plurality (48%) of Britons support Carney’s appointment, while nearly a quarter (22%) are undecided.

Most and least acceptable nationalities for senior roles

The survey also asked respondents for their views on whether it would be acceptable or unacceptable for citizens from certain other countries to be given senior roles, like governor of the Bank of England.

While Britons are somewhat tepid to any foreigner being appointed to high office, the poll shows that, at 48%, Canadians have the highest support, followed by Australians (43%) and Americans (40%).

Meanwhile, pluralities of Britons are opposed to someone from France (47%), Germany (43%) and Switzerland (40%) being given a senior role like BoE governor. 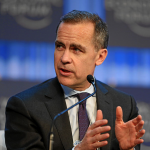 The three nationalities that British people are most opposed to giving senior roles to are Iranians (63%), Chinese (60%) and Russians (60%).

Commenting on the poll, YouGov Director of Political and Social Research Joe Twyman said: “Mark Carney faces enormous challenges in his new role, and so the fact that a third of the British public don’t think it’s acceptable for a Canadian to be governor of the Bank of England probably isn’t at the top of his list of things to worry about. But in an increasingly globalised world it is perhaps no surprise that the government has decided that considerations of national pride should take a backseat and instead they should get someone they regard as the best person for the job. Perhaps Mr Carney performance as governor could have an impact on people’s attitudes towards foreigners being given top jobs in future.”

What should Osborne announce in the budget?

Will BoE inflation report save the pound from a further hammering