10 Years on from the Global Financial Crisis in 10 Charts

Fidelity’s team of experts examines ten charts, showing how the world has changed since this defining moment:

This year marks an important milestone – the 10-year anniversary of the global financial crisis. While it is hard to pin down a single event or date as marking the start of this seismic event, the run on Northern Rock which took place in September 2007 is forever burned into the memories of those who were around at the time as the point where the crisis was triggered into the consciousness of UK savers and investors.

What is however irrefutable is that the credit crunch and its long-term consequences have irrevocably changed economies, markets and the world we live in. Ten years on from the global financial crisis, Fidelity International looks at ten charts – illustrating how the investment and personal finance landscape has changed – and the lessons learned.

Please click on the charts below to enlarge them. 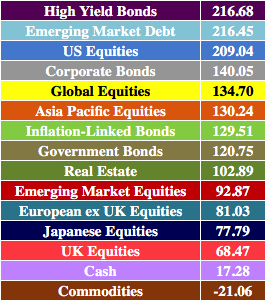 One year returns over 10 years

“The analysis of the returns of the various asset classes over the past ten years throws up some interesting findings. For example, and somewhat surprisingly, the cumulative returns of high yield bonds and emerging markets over the past decade have pipped US equities. Bonds have benefited from the collapse in interest rates in the wake of the financial crisis but without first suffering the savage bear market that equities experienced in 2008 and the start of 2009.

“What jumps out even more for me, however, is the benefit of a balanced portfolio. While there have been some years when every single asset class has risen, and some when there was a mixture of risers and fallers, there hasn’t been a single year in which everything has fallen together. This is really good news for a hands-off, long-term investor because it shows that diversification works. It’s a compelling case for putting together a well-balanced portfolio and simply holding it for the long term.” 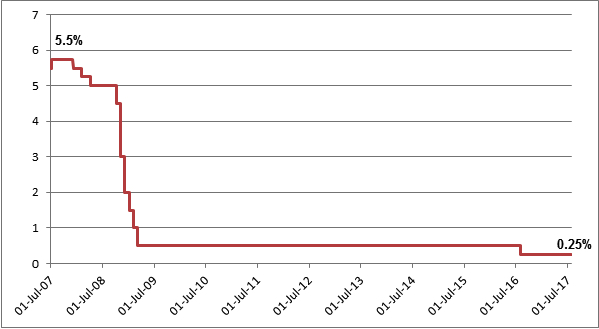 “It’s almost a decade since the Bank of England first took the knife to the bank rate. Today, people are still worried and speculate that a rate rise could be lurking around the corner. But the only move in rates since the March 2009 cut – the lowest since the central bank was founded in 1694 has been in the opposite direction. Back in August 2016, with Britain still reeling from the shock EU referendum result, the Old Lady of Threadneedle Street’s policymakers cut the base rate by another quarter per cent back to a new all-time low of 0.25%.

“Record low interest rates have been good news for borrowers – those with mortgages and credit card debit have enjoyed a prolonged period of very low rates. In fact, there is an entire generation of home owners who have never experienced an interest rate rise since buying their first homes. But for those who have been prudent with their money – savers and investors, the environment of perennially low interest rates has hurt.” 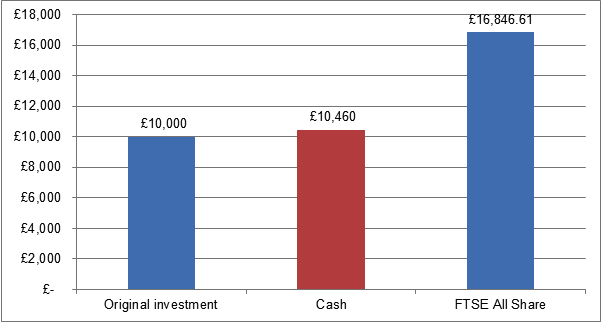 “Leaving your savings lingering in cash over the past ten years would have hurt.

“As the chart shows, had you saved £10,000 into the average UK savings account over the past ten years, you would now be left with £10,460. If however, you had invested £10,000 into the FTSE All Share index over the same period you would be left with £16,847 – that’s despite the dramatic stock market crash in late 2008, the Eurozone crisis and various political risk events of the past ten years.” 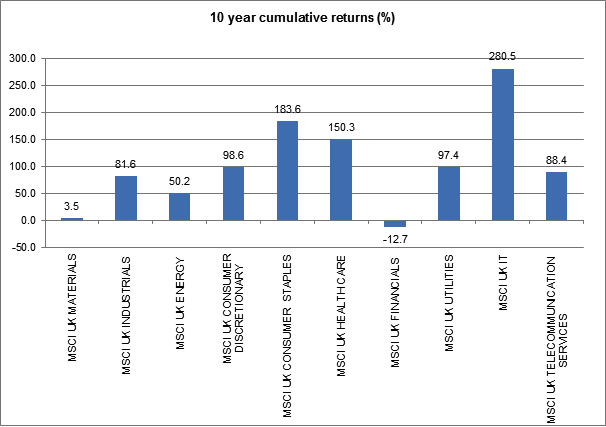 “The dispersion of returns over the past ten years makes another strong case for holding a well-diversified portfolio – spotting the winners and losers ahead of time is no simple matter and putting your eggs in a variety of baskets is the best way to ensure that you gain exposure to the sectors and asset classes that do end up delivering good performance.

“This chart also shows how stock market returns are to a large degree determined by the price an investor pays at the outset. Buying at a low valuation stacks the odds in your favour, while paying over the odds makes it very difficult to generate an acceptable return over time. Ten years ago, financial stocks were flavour of the month and unsurprisingly they have performed badly over the subsequent decade. Technology stocks, by contrast, were still in the early stages of recovery from the post-dot.com bubble slump. Buying while these shares were in the doldrums set up a bumper decade of returns.” 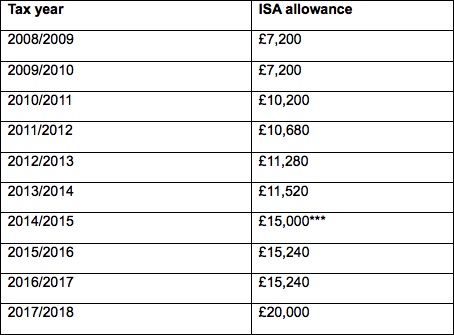 “Over the past decade, ISAs have grown to become one of the most attractive and generous savings vehicles available to investors today. Back in the 2008/2009 tax year, investors could only shelter a total of £7,200 into an ISA. Today they can put away almost three times as much with an annual ISA allowance of £20,000.

“Moreover, in the past decade there has also been a deluge of changes to further enhance the ISA as a family savings vehicle.  Since 2015, spouses or civil partners can inherit each other’s ISA protection when one of them dies. Many couples save from joint incomes, so this change offers bereaved individuals the chance to secure their financial future and enjoy the tax advantages they had previously shared.” 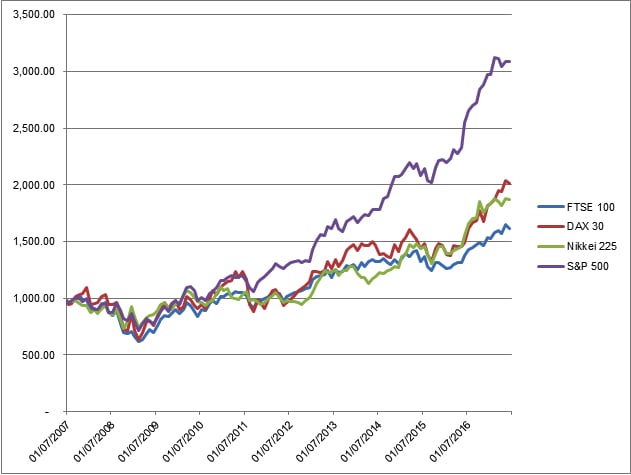 “It comes as little surprise that the US has led the recovery since the financial crisis. The authorities moved swiftly to slash interest rates, inject cash into the economy via quantitative easing and, perhaps most importantly, re-capitalise the banking system. The US is also the spiritual home of the best performing sector over the period, technology.

“However, while it has paid to stick with the US throughout the post-crisis upswing, it is now one of the most expensive markets in the world and there are other regions which offer better value for investors, namely Asia Pacific, Europe and Japan. Emerging markets, in particular, have endured a widening performance gap with the developed world and look well-placed to bounce back with growth, demographics and valuations on their side.”

“Inflation has yo-yoed over the past decade, passing the 5% mark as the credit crunch took hold and then falling into deflationary territory in the latter part of 2014 and for most of 2015. Today inflation is creeping up largely due to the weaker pound. Inflation never seems like a problem until suddenly it is. What makes today’s rising prices concerning is that it’s outpacing our pay packets, which means negative real returns. So as each month rolls by we’re getting progressively poorer.

“Inflation also wreaks havoc with a retiree’s pension savings. Many retirees rely on interest or dividend payments to supplement their income. Inflation not only erodes the spending power of future interest and dividend payments, it also chips away at the worth of your pension pot. If you’re drawing down an income from your pension, you may need to withdraw more to meet rising costs, but if you’re dipping into your capital to do this, you could run out of money sooner than you planned.” 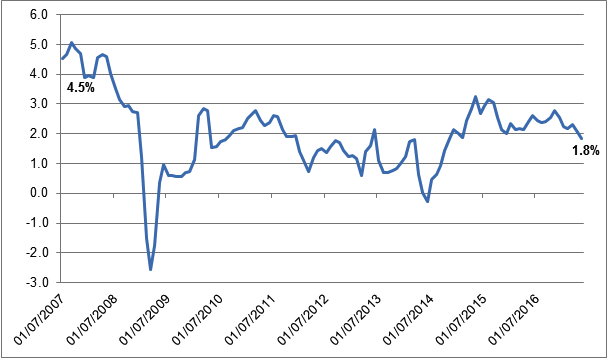 “Since the dramatic drop in wages in the heat of the credit crunch our earning s have flat lined for almost a decade. Weak wage growth has been a key feature of the post-financial crisis world.

“Many have pointed to wage growth as the ‘missing piece of the puzzle’, while employment is at record levels – our earnings remain weak.

“This could be down to slack in the labour market – meaning the jobs market isn’t working as well as it should. This is usually down to underemployment: people working part-time who want a full-time job or hidden unemployment: people who are not actively looking for work but who would re-join the workforce if the job market were stronger.

“Other factors impacting wage growth are poor productivity and the rise of technology, and in particular, automation.” 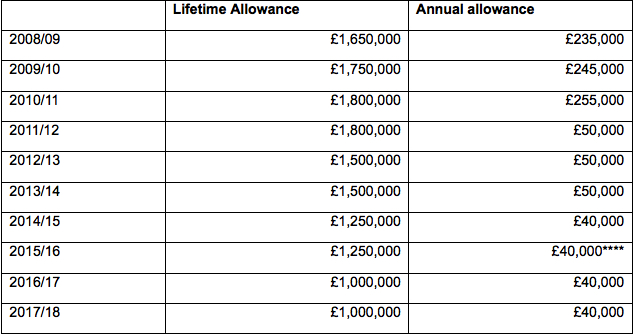 “After two years of rises in the allowances for pension saving after the crisis, it’s been downhill all the way. While successive governments have laid off changing the system of tax relief on pensions, the need to cut costs over the years has led them to dramatically limit the amounts that can be saved.

“Before the crisis, the top limits on pension savings were a concern only for the very rich but now many without extravagant earnings can fall within their scope.”

“Sterling has been on the back foot since the EU referendum, but it has traded in a range between $1.20 and $1.30 for the past nine months or so, shrugging off a deterioration in economic conditions and intensifying political concerns. That suggests to me that the bottom may have been reached versus the dollar. Against the euro things may well get worse before they improve, however. The economic outlook in Europe is better and there is much less political uncertainty.”