Follow in the footsteps of Alfred Russel Wallace (1823-1913), one of the greatest and most fascinating intellectuals of the nineteenth century – in a NEW tour from Jon Baines Tours. This tour takes place 100 years after this death in 1913.

Wallace developed the theory of evolution through natural selection in the Malay Archipelago, independently of Charles Darwin.

He was known as the greatest living authority on the region, particularly of its zoogeography and discovered what is now known as the Wallace Line – a dividing line between Asian and Australasian animal species that extends between the islands of Bali and Lombok and Borneo and Sulawesi.

On this tour you will travel through the fascinating cultures and spectacular landscapes of Singapore, Malaysia and Indonesia. The tour is led by naturalists George and Jan Beccaloni, world-renowned authorities on Wallace, who are also highly knowledgeable about this region, with a number of unique personal contacts. George is a curator at the Natural History Museum’s (NHM) London (UK), and the Director of the Wallace Correspondence Project. (See biography below)

You’ll start in Kuching on the Sarawak and move onto the jungle-clad peaks of Gunung Gading National Park, where the star attraction is the Rafflesia, the world’s largest flower.

The following day drive to the Semmenggoh Orangutan Sanctuary, where injured, orphaned or captive orangutans are cared for and reintroduced into the wild. In the afternoon visit the Anah Rais Bidayuh village to experience one of the traditional cultures of Sarawak, formerly known as the ‘Land Dayak’. You will also enter the important central ‘Baruk’, or the head house, where real human skulls still hang around the fire place – remnants of their days as headhunters. 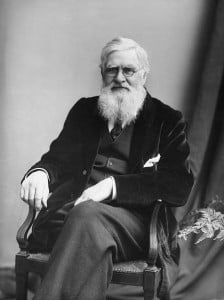 You’ll take a boat trip into beautiful Bako National Park. Encompassing seven distinct ecosystems, it is also one of the best places in Sarawak for wildlife experiences.

Fly to Singapore next morning and explore its rich tapestry of cultures. Visit Singapore’s Science Centre and see the fascinating Wallace Exhibition, which runs for one year in commemoration of the 100th anniversary of his death.

Then it’s on to Manadao in northern Sulawesi. Take a boat trip looking for the agile ‘spinner dolphins’, named for their acrobatic abilities. You can also snorkel in the Bunaken Marine Reserve amongst some of the best coral reef diving areas in the world.

At Tangkoko National Park you can spot Black Macaques, vivid birds and the tiny nocturnal tarsier monkey, which fits into the palm of a hand.

Fly to the dramatic cone shaped island of Ternate. Ternate was the most important of the “Spice Islands” of Maluku, once the world’s single major producer of cloves, a commodity that allowed the ruling sultans to become among the wealthiest and most powerful of all the sultans in the Indonesian region. In 1858, Wallace wrote his famous “Ternate Essay”, his pioneering account of evolution by natural selection. Wallace sent this to Charles Darwin, who had it published alongside his own account of the theory.

Take a speedboat to Halmahera and drive to the Weda Bay eco-resort. Halmahera boasts a pristine environment of white sandy beaches and unspoiled forests, with the spectacular Mt Mamuya in the distance. Next morning take a rainforest walk to spot Wallace’s Standardwing Bird of Paradise.

Visit the beautiful Boki Moruru Cave and later in the afternoon see hundreds of hornbills noisily descend onto one tree!

Rise early the next day for a rainforest walk and after lunch take a boat trip out of Weda Bay where you can go snorkelling.

Next morning fly to Bali and explore the vivid green terraced rice paddies and temples of Ubud. Drive to the east of the island the next day to view the famous Wallace Line. On a clear day, you can also sight the island of Lombok.

Return to Sidemen for a farewell dinner in the evening.

London (UK) Natural History Museum’s (NHM) collection of grasshoppers and relatives, and the Director of the Wallace Correspondence Project.

George founded the Wallace Memorial Fund in 1999 and co-edited the book ‘Natural Selection and Beyond: The Intellectual Legacy of Alfred Russel Wallace’ (Oxford University Press) and was the historical consultant for the highly acclaimed BBC series “Bill Bailey’s Jungle Hero”.

Jan Beccaloni is the curator of spiders and their relatives at the Natural History Museum. She is the Secretary of the Wallace Memorial Fund, the Meetings Secretary of the British Arachnological Society and the author of the acclaimed book “Arachnids”.

The tour will also be donating to The Wallace Memorial Fund

The cost of the tour including flights from London to Kuching and from Bali to London is £4,278

5 Essential Rules for Flying with Your Vape Kit