Facebook’s 10th anniversary on Friday 7 February follows a record set of quarterly results last week, which were well ahead of analyst expectations.

Interestingly, there are just six investment companies with exposure to Facebook (and four of these are in the Global sector), which perhaps reflects some of the cynicism of many commentators at the time of Facebook’s IPO on 18 May 2012. The Association of Investment Companies (AIC) has collated some comments from managers with exposure to Facebook.

“Having met Mark Zuckerberg we opted to ignore the laughter of many and bought shares in Facebook at IPO and we have added more since then. The company is making decent money and has a fantastic opportunity to dominate online advertising given its extraordinary data base of users. We see it as a long term winner and are happy to share in Zuckerberg’s vision for the company.”

“Foreign & Colonial originally had a stake in Facebook through its private equity portfolio. It is very exciting to see exciting growth companies like Facebook coming to the market and performing so well. We have increased our holding in Facebook since its IPO and it has continued to grow strongly.”

“Facebook has created the premier destination on the internet for people to share many facets of their personal lives. Despite being caught off guard by the rapid pace at which users transitioned from desktops to mobile devices, Facebook quickly switched gears and retained those users by focusing on its mobile app.

“With a vast audience and deep personal information on these users’ interests, Facebook is a favourite ad platform among marketers. In a short time, the company has been able to grow its mobile ad revenues from $0 to more than half of its total sales. We think Facebook’s success so far is just the tip of the iceberg – the company’s push into video ads could offer huge revenue growth opportunities.

“Where other online media properties are content being a supplement to a marketers’ TV ad campaigns, we think Facebook is uniquely positioned to not just supplement, but possibly substitute TV ad spending – the company has a better reach than the major television networks and better targeting capabilities.

“While we think Facebook has exceptional opportunities, we also note that the rate of deterioration in growth among technology companies is faster than ever. For this reason, we are continually looking for companies that, like Facebook, are reshaping the industries in which they operate. For example, we think Chinese-based Tencent Holdings is an attractive opportunity. Facebook does not operate in China so companies like Tencent have amassed huge user bases and are accelerating the monetization of their popular social Internet properties.

“Looking beyond the social space, we think payments are the next area to be transformed by the proliferation of smartphones and could garner Facebook-like growth opportunities. There are numerous companies and even peer-to-peer networks cropping up vying for their piece of the digital wallet. Though this theme may roll-out more slowly than social given the consumer habits, infrastructure, and regulatory challenges, we are keeping a keen eye out for the emerging leaders in this space.” 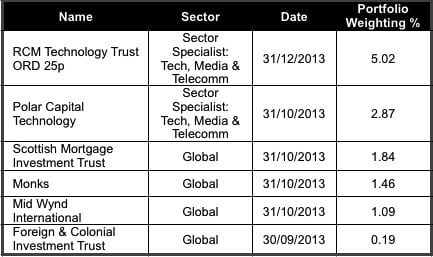 How to Profit Big from Gold Mining Stocks Left for Dead

The UK is recovering, but not rebalancing