A 20% sugary drink tax would cut the number of UK obese adults by 180,000, with the under 30s as the biggest consumers likely to be most affected

Although this is a relatively modest effect, people aged 16-29 years, as the major consumers of sugar sweetened drinks, would be impacted the most, say the authors.

So researchers at the universities of Oxford and Reading set out to estimate the effect of a 20% tax on sugar sweetened drinks on obesity in the UK – and to understand the health effect on different income groups.

Using data from surveys of dietary purchases, the price of drinks, and body weight, they estimate that a 20% sales tax on sugar sweetened drinks would reduce the number of obese adults in the UK by 180,000 (1.3%) and the number who are overweight by 285,000 (0.9%).

The health gains would be similar across all income groups, but would decline with age. As the major consumers of sugar sweetened drinks, young people (under the age of 30 years) would experience the greatest reductions in obesity.

The tax would be expected to raise £276m (€326m; $442m) annually (around 8p per person per week) and would reduce consumption of sugar sweetened drinks by around 15%. 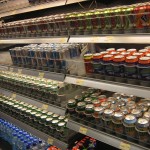 This revenue, say the authors, “could be used to increase NHS funding during a period of budget restrictions or to subsidise foods with health benefits, such as fruit and vegetables.”

In an accompanying editorial, Jason Block, Assistant Professor at Harvard Medical School in the US, says this study provides evidence that a 20% tax on sugary drinks can work – and he calls on more countries “to implement high taxes and measure the results.”

A proposal by the Academy of Medical Royal Colleges calling for the UK to pilot and monitor the effect of a one year 20% tax on sugary drinks “would be a good start,” he says.

“Econometric modelling studies are important and helpful but provide projections rather than measures after actual policy change. We now need policy makers to act and provide opportunities for real world evidence on a 20% tax on sugar sweetened drinks,” he concludes.