• Increasing confidence amongst consumers pushed spending up +3.3% – outstripping inflation for the first time in three years

• Biggest increases were in spending on entertainment (+9.3%) and travel (+4.9%) as consumer spent more on treats and having fun

After five years of rigid austerity, 2013 was the year when consumers loosened their purse strings slightly and spent more on treats and entertainment.

A review of the year's consumer spending by Barclaycard, which processes nearly half of all credit and debit card transactions in the UK, indicates that improving consumer confidence has pushed spending up +3.3% so far this year.

Over the course of the economic downturn consumers demonstrated strong fiscal responsibility – paying down debt, seeking greater value for money for everything they bought, and reducing their debt levels and increasing savings. In 2013, they increased their spending above inflation for the first time in three years.

The entertainment and travel sectors experienced the highest year-on-year spend growth, up by +9.3% and +4.9% respectively, as extra spending went mainly on enjoying ourselves and treating the family.

A much lower increase in general household spend (+3.4%) and clothing (+1.6%), suggesting that households are continuing to count the pennies and that having a good time needs to be off-set against spending elsewhere, for example by not updating their wardrobes.

As consumers felt more confident about spending money on taking the family to restaurants, or going to see the latest blockbuster with friends, spending at restaurants grew +11.8% this year compared to last and spending on trips to the cinema and theatre was up +6.9%.

But budget-conscious consumers continue to seek out the best deals and only spend when they see a price they want to pay. So, whilst the number of trips to restaurants was up, the amount spent per trip was down -6.2% on last year, for example.

And consumers are not willing to give up the hard-won benefits of their prudence from the economic downturn and are resisting the temptation to splurge. A fall in spending on clothes – women's and men's clothing spend was down -0.5% and -0.9% respectively – and in department stores (down -3.0%), indicated that spending in one area is being substituted for spending in another.

The weather really does help

The scorching summer and improving economic sentiment meant spend growth was highest in the summer months: June (+4.9%), July (+4.8%) and August (+4.4%). Conversely, the extreme snowfall in the latter half of January saw flat growth of +0.1%, primarily caused by people staying wrapped-up inside, as in-store spend was down -1.9% on 2012.

Come fly with me

Spending on airlines and hotels was up, +7.5% and +4.9% respectively, compared to last year, as the annual family holiday made a comeback – although it wasn't necessarily taken abroad.

However, when the weather turned and one of the best summers in years arrived, spending on public transport (+6.0%) and hotel stays (+5.8%) boomed in July, suggesting that we made more day trips and took advantage of a last minute "staycation" in the UK.

"Consumers spent more in 2013 than we've seen them do for three years, as confidence in both the economy and their own financial situation increased. But they spent on having fun and enjoying themselves, rather than updating their wardrobes or buying new things for the home. Whether it was watching the newest blockbuster, taking a holiday, or enjoying a meal out, as a nation we decided to place a higher value on the things we did, not those we bought."

"Looking ahead, though sentiment is still fragile, economic indicators are generally positive and consumer spending has outstripped inflation for seven out of the last eight months. So we are cautiously optimistic about the consumer spending outlook for 2014." 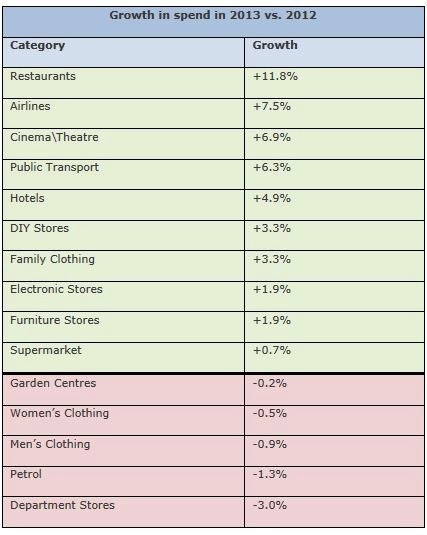