• European cities dominate the top of the list for highest Quality of Living.

Vienna is the city with the world's best quality of living, according to the Mercer 2014 Quality of Living rankings, in which European cities dominate. Zurich and Auckland follow in second and third place, respectively. Munich is in fourth place, followed by Vancouver, which is also the highest-ranking city in North America. Ranking 25 globally, Singapore is the highest-ranking Asian city, whereas Dubai (73) ranks first across Middle East and Africa. The city of Pointe-à-Pitre (69), Guadeloupe, takes the top spot for Central and South America.

Mercer conducts its Quality of Living survey annually to help multinational companies and other employers compensate employees fairly when placing them on international assignments. Two common incentives include a quality-of-living allowance and a mobility premium. A quality-of-living or "hardship" allowance compensates for a decrease in the quality of living between home and host locations, whereas a mobility premium simply compensates for the inconvenience of being uprooted and having to work in another country. Mercer's Quality of Living reports provide valuable information and hardship premium recommendations for over 460 cities throughout the world, the ranking covers 223 of these cities.

"Political instability, high crime levels, and elevated air pollution are a few factors that can be detrimental to the daily lives of expatriate employees their families and local residents. To ensure that compensation packages reflect the local environment appropriately, employers need a clear picture of the quality of living in the cities where they operate," said Slagin Parakatil, Senior Researcher at Mercer.

Mr Parakatil added: "In a world economy that is becoming more globalised, cities beyond the traditional financial and business centres are working to improve their quality of living so they can attract more foreign companies. This year's survey recognises so-called 'second tier' or 'emerging' cites and points to a few examples from around the world These cities have been investing massively in their infrastructure and attracting foreign direct investments by providing incentives such as tax, housing, or entry facilities. Emerging cities will become major players that traditional financial centres and capital cities will have to compete with." 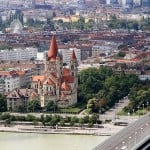 Vienna is the highest-ranking city globally. In Europe, it is followed by Zurich (2), Munich (4), Düsseldorf (6), and Frankfurt (7). "European cities enjoy a high overall quality of living compared to those in other regions. Healthcare, infrastructure, and recreational facilities are generally of a very high standard. Political stability and relatively low crime levels enable expatriates to feel safe and secure in most locations. The region has seen few changes in living standards over the last year," said Mr Parakatil.

Ranking 191 overall, Tbilisi, Georgia, is the lowest-ranking city in Europe. It continues to improve in its quality of living, mainly due to a growing availability of consumer goods, improving internal stability, and developing infrastructure. Other cities on the lower end of Europe's ranking include: Minsk (189), Belarus; Yerevan (180), Armenia; Tirana (179), Albania; and St Petersburg (168), Russia. Ranking 107, Wroclaw, Poland, is an emerging European city. Since Poland's accession to the European Union, Wroclaw has witnessed tangible economic growth, partly due to its talent pool, improved infrastructure, and foreign and internal direct investments. The EU named Wroclaw as a European Capital of Culture for 2016.

In Central and South America, the quality of living varies substantially. Pointe-à-Pitre (69), Guadeloupe, is the region's highest-ranked city, followed by San Juan (72), Montevideo (77), Buenos Aires (81), and Santiago (93). Manaus (125), Brazil, has been identified as an example of an emerging city in this region due to its major industrial centre which has seen the creation of the "Free Economic Zone of Manaus," an area with administrative autonomy giving Manaus a competitive advantage over other cities in the region. This zone has attracted talent from other cities and regions, with several multinational companies already settled in the area and more expected to arrive in the near future.

"Several cities in Central and South America are still attractive to expatriates due to their relatively stable political environments, improving infrastructure, and pleasant climate," said Mr Parakatil. "But many locations remain challenging due to natural disasters, such as hurricanes often hitting the region, as well as local economic inequality and high crime rates. Companies placing their workers on expatriate assignments in these locations must ensure that hardship allowances reflect the lower levels of quality of living."

Singapore (25) has the highest quality of living in Asia, followed by four Japanese cities: Tokyo (43), Kobe (47), Yokohama (49), and Osaka (57). Dushanbe (209), Tajikistan, is the lowest-ranking city in the region. Mr Parakatil commented: "Asia has a bigger range of quality-of-living standard amongst its cities than any other region. For many cities, such as those in South Korea, the quality of living is continually improving. But for others, such as some in China, issues like pervasive poor air pollution are eroding their quality of living."

With their considerable growth in the last decade, many second-tier Asian cities are starting to emerge as important places of business for multinational companies. Examples include Cheonan (98), South Korea, which is strategically located in an area where several technology companies have operations. Over the past decades, Pune (139), India has developed into an education hub and home to IT, other high-tech industries, and automobile manufacturing. The city of Xian (141), China has also witnessed some major developments, such as the establishment of an "Economic and Technological Development Zone" to attract foreign investments. The city is also host to various financial services, consulting, and computer services.

Elsewhere, New Zealand and Australian cities rank high on the list for quality of living, with Auckland and Sydney ranking 3 and 10, respectively.

With a global rank of 73, Dubai is the highest-ranked city in the Middle East and Africa region. It is followed by Abu Dhabi (78), UAE; Port Louis (82), Mauritius; and Durban (85) and Cape Town (90), South Africa. Durban has been identified as an example of an emerging city in this region, due to the growth of its manufacturing industries and the increasing importance of the shipping port. Generally, though, this region dominates the lower end of the quality of living ranking, with five out of the bottom six cities; Baghdad (223) has the lowest overall ranking.

"The Middle East and especially Africa remain one of the most challenging regions for multinational organisations and expatriates. Regional instability and disruptive political events, including civil unrest, lack of infrastructure and natural disasters such as flooding, keep the quality of living from improving in many of its cities. However, some cities that might not have been very attractive to foreign companies are making efforts to attract them," said Mr Parakatil.

The Secret Behind Your Secret Santa Gift