Last week's testimony by Janet Yellen, President Obama's choice for the next head of the Federal Reserve, was quite interesting. What I also found fascinating was the reaction in various markets.

Yellen was testifying in front of the Senate Banking Committee, and when asked about the possible formation of bubbles as a result of the Federal Reserve's quantitative easing program, she stated point-blank, "By and large, I would say that I don't see evidence at this point in major sectors of asset price misalignments." (Source: Bloomberg, November 15, 2013.)

I certainly don't have any experience working at the Federal Reserve, but I find this hard to believe.

Is the new Federal Reserve chairwoman trying to convince us that with a weak economy, it makes perfect sense for the stock market to be at all-time highs, margin debt to be soaring to record levels, the housing market to be experiencing bidding wars in certain areas of the country, and for vehicle sales to be soaring—all while incomes remain flat?

What do these factors tell me? All of these different sectors of assets are being fueled by cheap money produced from quantitative easing by the Federal Reserve.

Look at it this way: how many sectors of the economy are booming where there is no financing available, but cash purchases only? Very few. We keep hearing about retailers that cater to the average American having difficulty, since their consumers lack the cash to increase their spending. People are only buying goods if they can get credit, using cheap money.

Is this a bubble?

Well, I ask you to consider this: if the Federal Reserve were to remove all quantitative easing, would the markets, which have soared, including stocks, remain where they are currently? I would say no, because we are at artificially inflated levels. To me, that's a sign of a bubble.

It's one thing if the Federal Reserve were to inject quantitative easing over a short period of time due to a one-off event or crisis. Perhaps something catastrophic happens, the financial system lacks liquidity, and the Federal Reserve is the lender of last resort to calm the markets.

That's fine; in such a limited capacity, quantitative easing is perfectly acceptable and no bubbles or misalignment of prices would emerge, because people would know it was a short-term event.

However, we now have several years of endless quantitative easing by the Federal Reserve, which have resulted in the U.S. economy and the markets becoming completely addicted to cheap money.

With the new Federal Reserve chairwoman explicitly stating that she is willing to continue these policies—even though we all realize that there aren't any significant benefits to the average American—when quantitative easing finally ends, the pain will be horrendous. 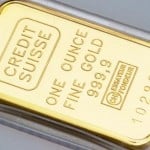 I find the reaction in the gold bullion market quite interesting. If the new Federal Reserve chairwoman is saying she will continue policies that are as aggressive (and possibly more aggressive) to even larger amounts of quantitative easing (money printing), this can only be bullish for gold bullion.

With much more money printing coming down the pipeline—and gold bullion significantly underperforming the stock market—investors can look for a catch-up move in precious metals going forward.

This article 2014: The Year for Gold Bullion Investors? by Sasha Cekerevac, BA was originally published at Investment Contrarians