• 24 per cent of Britons list paying off their debts as their main 2015 savings goal; and

• 23 per cent plan to save for a luxury item such as a car or holiday.

New research shows that consumers want to make 2015 the year they go debt-free, with one in four listing paying off their debts as their main 2015 savings goal.

The consumer poll was carried out by financial and technology services firm True Potential as part of its ‘Tackling the Savings Gap’ campaign that aims to unmask the true state of savings and debt across the UK.  True Potential asked more than 2,000 adults what is their main savings goal for 2015.

The most determined debt-busters are 35 to 44 years old, with 34 per cent saying that paying off their debt is their highest priority.

The British appetite for retail therapy has not disappeared however, with almost one quarter of consumers planning to save for a luxury item such as a car or holiday during 2015. This increases to 30 per cent among those aged 18 to 24. In addition, fifteen per cent of Britons plan to save for a ‘one-off’ purchase such as a house, wedding or education fees, increasing to 30 per cent among the younger demographic (18-24).

The research also compared all UK regions. The results show that:

• People in Northern Ireland are most committed to paying off their debts during 2015;

• People in the North West are most focused on saving for a luxury item such as a car or holiday; and

• The highest proportion of people that rate saving for retirement as their main saving goal live in London and the South East. 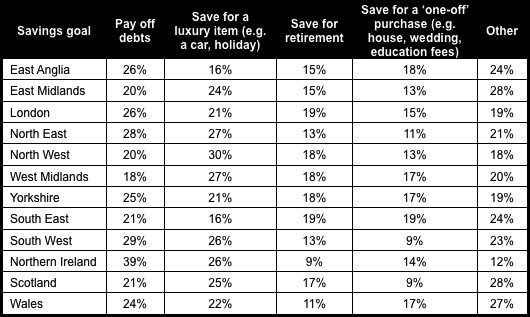 “These figures show that widespread debt is preventing people from saving for important life events, including retirement.

“In recent years it has become far too easy to get into debt. While it is positive that many Britons are making getting out of debt a priority for 2015, saving for luxury items is still a higher priority than putting money aside for retirement for people in all areas of the UK, excluding the South East, which is a worrying fact.

“Our research has shown that the average Briton believes they will require £23,000 per year to live comfortably during retirement. Currently, the average person puts just £300 into their pension pot each month. If this is done over a 45 year working life, this will create a retirement income of approximately £8,100 per year*, falling far short of expectations.

“A change of behaviour and a focus on putting small sums aside as often as possible, along with realistic and well defined savings targets, will be important if Britons are to achieve their 2015 savings goals.”

*Based on a twenty year retirement.

End of the Bonus Bonanza?