As part of a major new exhibition about the future of manufacturing (The Future is Here, 24 July – 29 October), the Design Museum has carried out a survey with Ipsos MORI which reveals that just 6%, or one in 17 people in the UK, have an interest in owning a 3D printer. The large majority (71%) say they have heard not very much or nothing at all about 3D printing.

The poll, which interviewed 994 people across Great Britain, gives a snapshot of the nation's attitudes towards this emerging technology. It analyses views on the pace of change and pressures brought about by radical developments in technology that are putting the individual at the centre of the design and manufacturing industry.

The trend for custom made furniture and personalised trainers is making its way – via open source design files online and desktop 3D printers – into the home. But is this an invasion of technology, or is does it signal the advent of an age when the barriers of access to design and making will ebb away forever?

New manufacturing techniques will involve the users of products as never before, revolutionising the role of the consumer. How we manufacture, fund, distribute, and buy everything from cars to shoes is progressing fast. The Future is Here shows what that means for all of us.

Ben Page, Chief Executive of Ipsos MORI said: 'Britain is divided into two tribes – those concerned that new technologies like the internet are destroying memory and knowledge, and unhappy with their pace of life, and those who embrace it as a powerful enabler of knowledge and who are comfortable with their busy lives.'

Key findings of the poll:

* 71% of people say they know very little or nothing about 3D printers while one in five (19%) say they know at least a fair amount. Is 3D printing the future of UK manufacturing – or just a fad?

*Only 6% of people say they are interested in owning a 3D printer, though this rose to 20% among those who know a great deal or a fair amount about 3D printers. This suggests that demand will rise if people become familiar with 3D printers and perhaps understand better how this emerging technology can be useful for them.

* Southerners are most interested (10%) in owning a 3D printer – but curiously Londoners were no different from the rest of the country (4%).

I wish I could slow down the pace of my life

* Northerners seem to be among the most averse to change, with 42% of those interviewed in the North wanting to slow down their pace of life, compared 33% of Londoners. People living in Scotland appear to be the least frightened by the pace of change, with just 26% wishing they could slow down.

* Having a high level of access to the internet did not seem to have any direct correlation with the desire to slow down.

Is the internet improving our knowledge or impeding it?

* Just over half (53%) think that people now know more than they used to thanks to the internet, while 37% believe that people know less now because they rely on the internet too much.

MAKE DO AND MEND

Throw it away or repair it?

* A lower proportion of younger people aged 15-34 (64%) agree that we throw away too many things.

* Londoners (67%) are less likely to acknowledge we throw away too many objects rather than get them fixed – compared with 78% in the North and South (excluding London).

* The over 65s are especially likely to be concerned about the prospect of guns and knives being printed at home (40%).

* Around a third (35%) of people agree that it is a good thing people will be able to make everyday objects and spare parts at home – but an equal number (32%) are also concerned about people being able to make guns or knives at home.

* Men are more likely than women to think that manufacturing at home is a good thing (43% vs. 28%)

* 15-34 year olds are more positive (43%) about manufacturing objects from home, and this declines with age (22% among those aged 65+). The image of the old man tinkering in the shed could be a thing of the past as the YouTube generation gets interested in high tech manufacture from home.

* There's a clear regional divide. 40% in London and the South agree making everyday objects at home is a good thing, compared with around three in ten across the Midlands (31%), the North (34%) and Scotland (32%).

Should we leave the design of household items to the professionals?

* 2 in 3 people (66%) in the UK overall say that they would rather leave design issues to the professionals, though 30% of Londoners would like more input in the design of their household items (compared with 20% nationally and 15-22% in other regions).

Customised goods could be the answer to a more sustailable culture

* Around 35% agree that if consumer goods were customised they would be less likely to replace them as frequently.

The Design Museum is collaborating with the UK's innovation agency, the Technology Strategy Board, to deliver a major new exhibition about the sweeping changes in manufacturing that are transforming our world.

New manufacturing techniques will involve the users of products as never before, revolutionising the role of the consumer. How we manufacture, fund, distribute, and buy everything from cars to shoes is progressing fast. The Future is Here shows what that means for all of us.

The boundaries between designer, maker and consumer are disappearing with a growing movement of 'hacktivists', who share and download digital designs online in order to customise them for new uses.

In a highly experimental move the museum will house the first 'Factory' of its kind where visitors can discover how 3D printing works and witness live production.

The exhibition looks at what exactly drives innovation and how it can lead to increased productivity and economic growth. A visit will reveal how the new industrial revolution has the potential to affect everyone, radically altering our attitudes to the pace of change driven by new technology.

Mass customisation is a central story: from trainer manufacturers offering personalised shoes on a global scale, to 3D printed dolls with features that consumers can design and order online. A carbon loom invented by Lexus to weave car parts such as steering wheels and dashboards from strong carbon fibre is represented, and other exhibits include an open-source approach to architecture, the WikiHouse.

Emerging technologies and platforms such as crowd funding, social networking digital looms, online marketplaces, 3D printing, nanotechnology, biotech, networked manufacturing, CNC [computer numerical controlled] routing and open-source micro computing, are all removing the barriers of access to manufacturing. It is the role of designers and the design process to participate in exciting new technologies, so that more people than ever before can take part in the production of our physical world.

The Future is Here presents today's emerging technologies that will become the growth sectors of tomorrow.

'200 years ago what happened in Lancashire's cotton mills and Cornwall's tin mines changed the world. Now it's the turn of Silicon Roundabout and the hacktivists.' 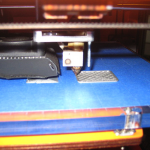 'The UK is home to some of the most innovative companies in the world, and their designs are essential to keeping the UK at the front of the global race for manufacturing. I have identified eight great technologies including robotics, regenerative medicine and advanced materials which I believe will play a role in boosting the UK economy. This exhibition provides an opportunity for visitors to see these ground-breaking technologies in action.'

'The latest Design Museum exhibition shows how manufacturing and the relationship between designer and customer could change in a very short space of time. Our city's future prosperity depends on the ability to stay at the forefront of innovation. With the most creative designers based here and a burgeoning technology sector, London is well-placed to maximise the potential of links between design and technology, which will become increasingly important as we compete on the global stage.'

David Bott, Director of Innovation Programmes at the Technology Strategy Board commented:

'The role of the Technology Strategy Board is to sponsor exciting and high-value business-led innovation in the UK and we're proud of the fact that over 60% of our R&D investment goes to small and medium sized companies, where so much innovation takes place. We're delighted to support this exhibition as both a wonderful showcase for innovative, disruptive technologies – many of which are already having a profound effect on our lives – and as a snapshot of some of the businesses we've supported on their journey to commercial success.'

Search begins for the world’s best innovations in science, engineering and technology