43% increase in tax taken from Capital Gains to £5.5 billion in just one year

Taxpayers saw a 43% jump in their Capital Gains Tax (CGT) bills last year paying £5.5 billion, in CGT in the last year* up from £3.4 billion the year before, says UHY Hacker Young, the national accountancy group.

UHY Hacker Young explains that a succession of increases in the Capital Gains Tax (CGT) rate, and the removal of CGT reliefs, combined with an increase in turnover of investments like shares and buy-to-let property has led to this bumper tax bill.

“Recent increases to CGT are really beginning to bite. With an increase in the turnover of assets this has led to a dramatic increase in Government revenues from this source.

“The top rate of CGT was increased to 28% as a response to the financial crisis, and many taxpayers would like to see this rate cut as the economic recovery beds in.

“Many of these transactions such as the sale of a property or the sale of business assets are one off opportunities for individuals to turn their investment into cash for their retirement – so CGT can be really problematic. Coupled with the recently announced increase in dividend taxation, any further rise in CGT rates could seriously undermine entrepreneurs and small businesses, which are the bedrock of our economy.”

CGT is often seen as a disincentive for business owners to take on the extra work and risks needed to grow their business past a certain scale. Such a process would lead to lower levels of economic activity and new job creation.

London and the South East still pay the lion’s share of CGT, but the North’s burden is rising sharply as well

£2.3 billion in CGT was levied on taxpayers in London and the South East in the last year – that is 47% of the UK’s total CGT take despite representing only 27% of the UK’s population.

UHY Hacker Young says that there were also large increases in the amount of CGT payments from the North of England. North East England experienced an 87% rise in a year from £46 million to £86 million* in CGT, while North West England saw CGT receipts jump 67% from £247 million to £412 million over the same period.

Matthew Hodgson comments: “A disproportionate share of the CGT burden continues to fall on taxpayers in London and the South East.

“However, rising property values in the North mean that CGT is going to become an increasing problem there as well.

“It is important that taxpayers make full use of all the reliefs available to them. There’s still capacity for increased use of Entrepreneur’s Relief in a wider range of situations than many people realise.” 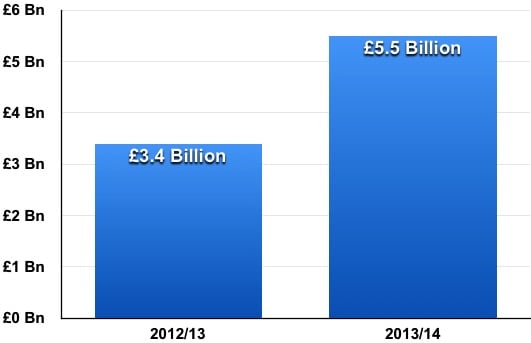