The collapse of the oil price has created losers and winners, and like every major movement in a commodity sector, the trick for investors is figuring out which side of the trade to be on.

The most obvious victim of the slide in Brent and WTI prices over the last 6 months has been the major oil producers. Holders of these equities have seen price slides up to 33 percent. The question for oil company investors now is how to determine which of these companies are prepared to weather a sustained period of oil prices around $50 a barrel, or worse. Inevitably, those companies with high debt levels combined with high operating costs will be the first to get washed away. In contrast, low-leveraged companies with attractive cost structures are likely to survive. These companies will gain when the oil price comes back, and are the ones that investors should be eyeing right now.

But stock picking isn't the only way to make money out of the butchered oil price. Here are 5 ways to position yourself for either a recovery or a further deterioration of the oil market, depending on where you place your bet.

Oil production is, to say the least, a costly business. The cost of finding and "lifting" a barrel of oil out the ground varies between $16.88 in the Middle East to $51.60 offshore in the United States, according to the US Energy Information Administration. An analysis by Citi published by Business Insider shows that a significant amount of US shale oil production will be challenged if Brent prices move below $60 (Brent is currently at $49), and that companies are canceling projects that require prices above $80 a barrel to break even. 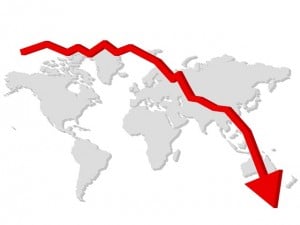 In this difficult price environment, investors want to buy companies that can produce at a lower rate than their competitors and do not have significant debts they need to service while having to accept lower commodity prices. Here are three possibilities:

Crescent Point Energy (NYSE, TSX:CPG): A conventional oil and gas producer with assets in Canada and the United States, Crescent Point can pull oil out of the ground at a cheaper rate than its Canadian oil sands rivals. Despite cutting spending by 28 percent in 2015 compared to last year, the Saskatchewan-focused firm is still planning to increase average daily production to 152,000 barrels. Crescent Point has a solid balance sheet, with net debt totaling $2.8 billion as of Sept. 30, against a market value of $11.55 billion. CPG also offers a very attractive 10.64% dividend at its current share price, leading to the speculation that its dividend could be cut if low oil prices persist. However, Crescent Point has stated that it will only cut its dividend as a last resort and has other levers at its disposal, including borrowing through one of its credit facilities or further reducing its capital budget later this year.

Husky Energy (TSX:HSE): Having gotten clobbered 25 percent over the last six months, partly due to cost overruns at its Sunrise oil sands project, upstream and downstream behemoth Husky now offers a respectable 4.69% dividend for buy and hold investors. Husky is pulling in the reins on spending, trimming $1.7 billion off its capital budget in 2015, mostly at its Western Canadian oil and gas operations. A third of Husky's production in 2015 was natural gas, which has held up better than oil, and should provide smooth earnings going forward. The company will also get a bump in cash flow from its Liwan project in the South China Sea. This joint venture with Chinese company CNOOC is in its second phase and Husky will receive a 50 percent price premium on the gas compared to North American prices.

Suncor Energy (NYSE, TSX:SU): The Canadian oil sands giant has been a lean machine since scrapping its $11.6-billion upgrading plant back in 2013. As The Motley Fool pointed out in a recent piece, Suncor has dropped its operating costs from $37 per barrel in 2013 to $31.10 in the last quarter. The company is not being strangled by a high debt load as it contends with lower margins. SU had about $6.6 billion in debt compared to nearly $42-billion in shareholder equity as of Sept. 30, one of the lowest debt ratios in the industry, notes Motley Fool. Lastly, investors with a long view can take comfort from Suncor's respectable 3.17% dividend.

2. Shift your individual stock holdings to an energy ETF

Picking energy stocks is tough at the best of times, let alone during this volatile, catch-a-falling-knife environment. Shifting to an energy ETF might be a better way to hedge oil risk right now. One possibility is the iShares S&P TSX Capped Energy Index Fund (XEG). The index includes energy stocks listed on the TSX, with the weight of any one company capped at 25 percent of the market cap of the index. Owning the ETF may be a good way to capture a short-term bounce in the energy market if momentum swings to the upside.

The time to begin shorting oil would have been 6 months ago, but those who believe crude has further to fall could still earn some gains if they time a short correctly. One way to do that is to purchase an inverse oil ETF. Zacks has a good article on 4 possibilities, including the popular ProShares Ultrashort DJ-UBS Crude Oil ETF (SCO). Another is the Horizon BetaPro NYMEX Crude Oil Bear Plus ETF (HOD). This derivative-based fund resets its leverage daily, making it a complex instrument that should only be used by experienced traders. An investor who bought HOD back in June would have realized a 6-month gain of 264.5%.

Oil producers have revenue coming in even though the price of oil is down. Oilfield service companies are beholden to producers to drill and service new and existing wells, making them especially vulnerable to falling prices. When the majors cut their capex budgets, oilfield service companies feel the pain. Hedge funds started shorting oilfield service companies in November, with CGG, Fugro and Seadrill among the most shorted stocks in Europe, according to Markit data quoted by Reuters. US-based short candidates include Schlumberger (NYSE:SLB), Halliburton (NYSE:HAL), Baker Hughes (NYSE:BHI) and National Oilwell Varco Inc. (NYSE:NOV).

Lower prices for gasoline, bunker fuel and jet fuel have made winners out of airlines, shipping and trucking companies. Two examples are Delta Airlines, up 27.2% since June, and Canadian regional carrier WestJet (TSX:WJA), which has gained 19.2% in the same period. Transportation logistics companies such as TransForce Inc. (TSX:TFI), Saia (NASDAQ:SAIA), Echo Global Logistics (NASDAQ:ECHO) and J.B. Hunt Transport Services (NASDAQ:JBHT) may also be worth a look, although the dividend payouts on these companies tends to be meager or non-existent compared to the oil majors. The author does not hold positions in any of the above-mentioned equities. Due diligence is recommended before making any investment decisions.

By Andrew Topf of Oilprice.com