8.8 Million Households Would Not Last a Week on Their Savings

New research from HSBC has found that over a third of people in the UK – around 8.8 million households – only have £250 or less set aside as a financial safety net.

The number of households in this situation has risen by almost 800,000 since October 2012, when just over 8 million had £250 or less in their savings pots.

The 18-24 age group are the worst off in terms of savings, with a third having nothing to fall back on and 6% having less than £250 in their nest eggs. However, 35-44s are not far behind, with 33% having nothing in savings and 12% having less than £250. As this age group has greater financial responsibilities (with daily outgoings 54% higher than 18-24s’) they would struggle, lasting just five days on savings of £250 compared to seven for 18-24s.

Almost a third (31%) said they would not be able to pay their bills or mortgage/rent if they were unexpectedly to lose their income, up from 28% in October 2012, while 36% would be dependent on their savings. Other methods of covering their payments are insurance or increasingly, credit cards. (See Table 1 below.)

Overall, the average person has a savings pot of £14,401, which would last for nine and a half months based on average monthly outgoings of £1,500. However, women are less well prepared than men to cope with a financial emergency. While typical outgoings indicate men would be able to live off their savings pots for over a year, women would last less than seven months. They are also significantly more likely to have no savings compared to men (29% vs. 19%) or savings under £250 (10% vs. 8%).⁵

Table 1: How Brits would cover their monthly payments if they lost their income: 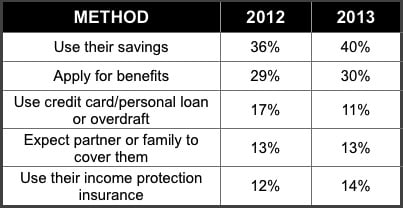 “The findings indicate that the proportion of Brits who are financially unprepared should they face any unexpected expenses or loss of income has risen steadily over the past year, with an extra 800,000 households admitting to savings of £250 or less.

"Getting into the habit of saving and making regular savings, no matter how small, can help to build up a financial safety net that avoids having to resort to methods that add to debt. There are many savings accounts in the market that are designed to help people get into this habit, such as regular saver accounts. As a target, it’s important to keep in mind that as a general rule, a minimum of three months’ salary should be available for a rainy day.” 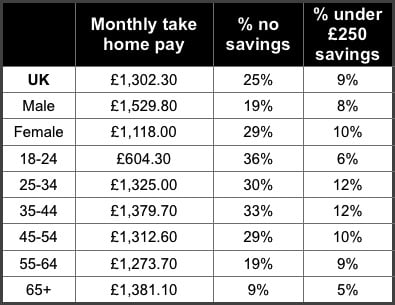 Opinion Matters survey conducted in September – October 2013 on behalf of HSBC among 2,035 people in the UK aged 18 and over.

The UK has a new basket of goods