A shortage of houses to sell is currently holding the housing market back, according to 47% of property professionals surveyed by myhomemove, the UK’s leading provider of mover conveyancing services, ahead of its annual housing conference on Wednesday 20th May.*

90% of those surveyed believe the market is being held back and a shortage of stock was cited as the prominent cause. This suggests that improved confidence from sellers in the wake of the decisive election result could ensure increased stability and predictability that will deliver more confidence, pushing the number of house sales up.

This was followed by a quarter (24%) of respondents blaming a lack of mortgage availability, perhaps reflecting concerns about the impact of affordability rules on lending to older borrowers.

16% said that a lack of new build properties was holding back the market, reinforcing the need for developers to keep building.

Property professionals’ views on what is holding back the housing market 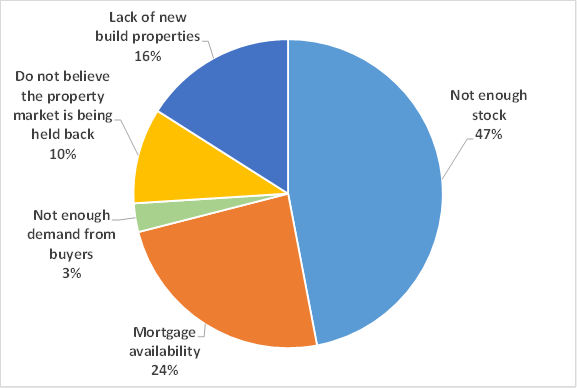 There was strong support from myhomemove’s conference delegates for extending the Help-to-Buy scheme for new build purchases to 2020. A strong majority of 80% of respondents supported the policy, compared to a mere 8% who opposed it.

There was also strong support for the party’s starter homes scheme, with 65% supporting it and just 3% opposed.

But the property professionals were divided on one of the other main housing policies put forward by the Conservatives in their manifesto: reducing inheritance tax on the family home. 42% said they support the policy, while 38% opposed it.

Percentage of respondents who support/oppose the main Conservative housing policies 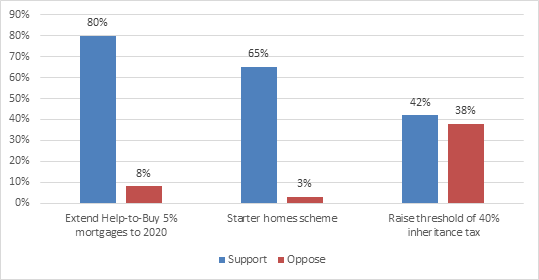 Remaining percentages are respondents who do not know/are undecided

Almost two in five (38%) respondents said that a target of building 200,000 new homes was achievable. The new Conservative Government promised to build 200,000 starter homes for first time buyers in its manifesto.

Property professionals attending myhomemove’s conference said that the new Conservative Government will find it easier to implement its Right-to-Buy scheme for tenants of housing associations than it will to deliver its Right-to-Build programme. Both policies were outlined in the party’s manifesto.

43% said that a Right-to-Buy scheme for housing association tenants was realistic, with 27% not sure. There was, however, greater uncertainty over whether the party could implement the Right-to-Build scheme in the Conservative manifesto: only 26% thought this policy was achievable, whilst 41% were not sure. 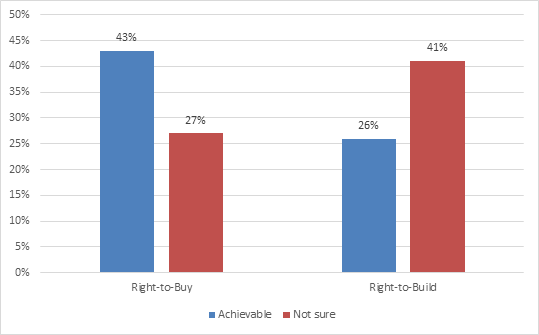 Doug Crawford, CEO of myhomemove, comments on the findings:

“Property professionals coming to our annual housing conference are clearly concerned about the obstacles that are holding back property transaction numbers. The good news is that the decisive election result could provide a confidence boost to consumers that will mean more properties are put on the market.

“The main housing policies outlined by the new Conservative Government in its manifesto are, for the most part, popular within the industry. The question now is whether the Government can deliver on its promises and how quickly it can do so. Some policies, like extending Help-to-Buy, are far simpler to deliver than others, like the proposed Right-to-Build scheme. This will undoubtedly be a big topic of debate at our conference, just one week before the Government sets its policy agenda in the Queen’s Speech.”

* Delegates polled by myhomemove include estate agents, mortgage lenders, brokers and housebuilders. Research carried out in April among 159 property professionals.

A Resi ISA for Second Steppers