The financial crisis of 2008 was the biggest panic America had witnessed since the Great Depression. Dubbed the “Great Recession,” its after-effects linger. In fact, this is the worst post-bust recovery on record.

Today, for investors, especially stock market investors, there are two camps: those who believe we are in recovery, and those (like me) who believe something is wrong with this recovery…it doesn’t feel or smell right.

As I wrote yesterday, the housing recovery isn’t real. We don’t have first-time home buyers coming in and buying homes to live in (like they should). Instead, large financial institutions have taken up the inventory of foreclosed homes to rent them out for a profit.

And most of the jobs that have been created since the financial crisis have been in the low-paying service sector—in retail jobs and restaurant jobs. Our kids are graduating from college (with plenty of debt) and are unable to find the job they trained for because they are competing against older middle managers for these jobs.

Our Federal Reserve, which I believe could be the only central bank in the world not owned by the government of the country it operates in, says our economic problems can be corrected by printing lots of extra paper money. That’s what the media is having us believe, too.

The real story is that money printing has only helped Wall Street and the big banks. The stock market is higher today, not because companies are making bigger profits, but because all that new money the Fed is creating is making its way back into the stock market. Artificially low interest rates are enabling big corporations to borrow money to buy back their own stock, right in the open stock market, giving us the impression that per-share earnings are increasing at a respectable rate.

With the Fed buying mortgage-backed securities, the big banks are getting rid of their junk loans in exchange for cash. (Great gig if you can get it!) But instead of taking that money and making loan requirements easier for would-be home buyers and business people, big banks are using the money to either buy back their own stock or to invest for their own good. This is what I believe is really happening here with the stock market, and this is why the rich are getting richer in this country and the poor are getting poorer.

But a funny thing happened on the way to higher stock market prices—the small guy missed out. According to a Gallup survey done in April of this year, only half of Americans have invested in individual stocks, equity funds, self-directed 401(k)s, or IRAs. That’s down a whopping 25% since mid-2002! (Source: “Why Individual Investors are Fleeing Stocks,” Wall Street Journal, July 10, 2013.) 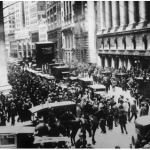 As for me, I’ve been recommending caution with the stock market for the majority of 2013. How can I tell my readership that it’s even remotely okay to invest in the stock market after what you’ve just read above? Sure, my call may not have been on the money so far this year. But at what point does the entire Ponzi scheme of the Fed printing money and giving it to the big banks and the government (to pay its bills) end? No one knows for sure, but all good things do come to an end.

Through my career, I have been successful at buying low and selling high. I don’t consider buying stocks today as “buying low.” But there is another investment I do consider “kicked-in-the-gut” and outright depressed. And if you have the foresight and guts, that’s the kind of investment you should get into while its price is low. I’ll give you a hint: I write about it in these pages often, it’s yellow, and you can’t just print more of it!

TheCityUK response to the Chancellor of the Exchequer’s Budget 2015