Friday’s eagerly awaited jobs data came in as most forecasted at 120k but it seems there were still a few out there looking for an even better number c.200k prompting a sell off in the afternoon, particularly after EURUSD failed to breach the strong 1.3550 resistance level.

Since then , however, we’ve seen the usual suspects buying the dips ahead of today’s key statement from Chancellor Merkel and President Sarkozy on the much trumpeted fiscal union plans that will be approved at this Friday’s “ make or break” EU summit. EURUSD has recovered from lows around 1.3350 again to reach 1.3453 while GBPUSD has back to 1.5650 having found support around 1.5570.

Quite where the new fiscal union plans leave the UK and the Pound in all this is still very much up in the air, requiring as it will a new treaty per se and David Cameron being on record as promising no further concessions to the Eurozone. We can expect this to weigh on the Pound and have indeed already seen some downward reaction over the past couple of sessions (see rate table below).

EURGBP continues to trade in a tight range though which is understandable given our high levels of trading with the Eurozone and therefore positive EU news could also be deemed UK positive too, and vice versa of course 0.8550 remains first support again with last week’s low of 0.8520 (GBPEUR 1.1737 resistance) the next big level while 0.8610 (1.1614) remains pivotal on the other side.

The Aussie $ and the Swiss Franc also remain in consolidative mode as we start this crucial week. The RBA tonight announce their latest interest rate decision where some analysts see a 0.25% hike but the view is by no means unanimous, and there was further week-end talk that the SNB will raise the EURCHF floor to 1.2500 this month. With a semi official line already raised to 1.2230 (so it would appear) from 1.2000 and the market really not taking it on with any aggression then it might be churlish of them to act just.

There has been talk that the US Fed will give loans to the IMF to help bail-out the Eurozone but this will not sit well with many across the pond. Perhaps they’re just showing willing knowing that they’re going to need some help back sooner rather than laterÂ Â Â  Â In any case US Secretary Geithner is flying over this week ahead of Friday and will hope he gets a warmer welcome than before. 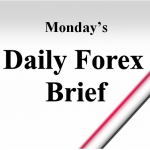 Various bits of data out today but the main focus undoubtedly will be on Paris.

And after the Eagles’ giant-killing last week it could well soon be the turn of the mighty Shrimpers who have been drawn away to Liverpool in the FA Cup 3rd round. Ok, so they’re got the small hurdle of a replay against Oldham first but, hey, what greater incentive could they need

Have a good week everyone. With less than 3 weeks to Xmas and the Eurozone in the balance we’ve got a few challenges ahead for sure.