Research released today by energy efficiency experts TheGreenAge has revealed that one in four UK adults (26%) have had an argument about the central heating, a figure expected to rise over the Christmas period as families spend more time together at home.

Of those that have argued about central heating:

· 74% have argued over the temperature of the house

The survey, commissioned to encourage people to consider having a Green Deal assessment, found that Brits are also a nation of "secret heaters", with 44% of female cohabiters admitting that they have switched on the heating without their housemates or partner's consent, while a further 39% confessed to having covertly turned up the heating when no one was watching.

Two in five male cohabiters (42%) admitted to having secretly reduced the temperature at home, and 38% claimed they had switched it off completely, without telling their housemates.

In addition, the findings showed that the issue of 'home central heating' has now joined 'cleaning chores' at the top spot in a list of things British adults argue about at home, sitting above: 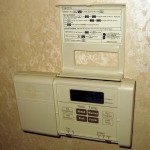 "The drive to maintain a stable warm environment is very strong in humans. However, men and women have a very different physiology and perception when it comes to temperature. Women tend to feel the cold more and are driven to take immediate action, whilst men are generally less sensitive to cold, and therefore consider factors such as the financial implications of heating the home.

"We are very sensitive to sudden changes in temperature and therefore what we need is a shift in the structural make up of the home to ensure a stable temperature environment suitable for both sexes. This can be achieved in the long term by better-insulated homes, which prevent excessive and impromptu use of heating and some of the conflict this causes."

"These findings show that family quarrels about the central heating have become as much of a Christmas tradition as turkey, presents and mince pies. With a cold winter setting in, people want to know how they can keep their homes warm and cosy without generating budget busting bills.Improving the energy efficiency of their homes is the answer and a having a Green Deal assessment should be the first step towards doing this".

Free and impartial advice on making energy saving improvements to your home is available from the Energy Saving Advice Service on 0300 123 1234.