'A Postcard from India' by Craig Botham

Following his recent trip to India to meet with companies, government officials and private sector analysts, Craig Botham, Emerging Markets Economist at Schroders, shares his findings in 'A Postcard from India'….

There remains strong belief in the ability of Prime Minister Modi to push through needed reforms, but it was not difficult to detect a hint of frustration in some quarters at the lack of progress on this front. Nonetheless, it is still expected that progress will be forthcoming.

There seems little denying though that even absent “big bang” reforms, things are improving in India. Businesses spoke positively of the heightened engagement and efficiency of the government bureaucracy, with response times greatly reduced. The scope for further gains here was also highlighted at several meetings, particularly as regards the $300 billion in stalled projects, at least half of which are held up by regulatory or other bureaucratic issues. Land acquisition is a particular problem, accounting for 33% of stalled projects.

Reforms are being delayed, in part, by the lack of a ruling party majority in the upper house, preventing passage of key bills. For now, the government is attempting to overcome this blockage via executive fiat, issuing ordinances to enact reforms on a short-term basis. But with a six month life span these are not providing sufficient assurances for investors. Prospects for corporate capital expenditure, and hence growth, are also limited by low capacity utilisation (currently around 65%); a problem only economic growth can address. In general, the repeated refrain was that India has seen a qualitative but not quantitative change, and that things must change “on the ground” before investment will revive.

Again though, there was confidence that key measures could be passed, despite the obstacle posed by the upper house. The government would hold a majority in a combined session of the upper and lower houses, and so could pass a bill by calling such a session – though this requires the upper house to have blocked the bill first. It is not an ideal method, and should be used sparingly to preserve political capital, but will mean the government is able to press ahead with the more important reforms, including land acquisition reform. 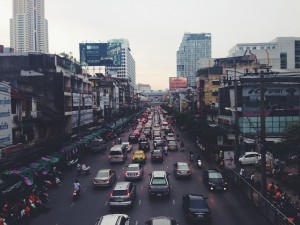 A separate but still important issue is this year’s budget, due February 28th. It was seen by everyone we met as a key indicator of government intentions. Although corporate capital expenditure may take time to recover, the budget offers the possibility of a pick up in infrastructure expenditure, even while staying on track for fiscal consolidation. To achieve this, the government would need to switch some current expenditure to capital expenditure – important politically because it would signal a commitment to longer-term planning, and important economically because infrastructure is in dire need of investment.

Energy and transport are two sectors flagged as having clear infrastructure gaps, though we found differing opinions as to where the main gap lay for the energy sector. On the generation side, lots of plants are stalled for want of finance, or land acquisition issues, while existing plants are sitting idle because they can not obtain fuel. Banking sector reforms are being implemented to aid with financing, in conjunction with plans to develop the capital markets. As mentioned, land acquisition is temporarily being tackled through ordinances and in the long-term should be resolved through a joint session of parliament. Fuel provision is lacking in part because of legal issues surrounding allocation of coal blocs (expected to be resolved in time for 2016 production), and partly because of poor transport links impeding the use of imported coal. In all honesty, having experienced Delhi’s pollution, this might be something of a blessing in disguise for now, but improved rail connections are already being constructed under the dedicated freight corridor projects, and will ultimately push these costs down.

Overall then, the government seems to know what needs to be done, and is willing to do it. Meanwhile, the private sector is ready – in some cases straining at the leash – to help India grow as soon as it sees concrete evidence of reform. But expectations have moderated from their May 2014 highs, to be replaced with a more realistic if less inspiring mantra: “gradualism works”. For now though, along with every Indian corporate, watch the budget, which will be announced next Saturday 28th February.