The first quarter of 2014 saw the British economy grow by 0.8%  – our fifth period of consecutive GDP growth and the longest unbroken run of economic positivity since the financial downturn of 2008.

What’s more, further good things are being predicted into the next 12 months. GDP is anticipated to rise by between 2.9% and 3.4% in 2014, while the International Monetary Fund (IMF) anticipates the UK to be the strongest performer of the world’s major economies this year.

But what does this mean for small businesses? Is this a short-lived boon that only benefits the big boys? Will things change for the better in 2014 for SMEs?  Let’s see what an improving economy means for small enterprises:

It seems that the growing economy is good news for small businesses. Aldemore’s March SME Monitor report [1] reports that in Q4of 2014, 3,800 small businesses entered into insolvency – a figure that has been steadily declining since the high of Q2 2009.

Borrowing is getting easier

Being able to access cost-effective finance has been a common issue for millions of small businesses since the financial downturn. Happily, the tide seems to be turning.

Government finance initiatives such as the Funding for Lending scheme and the improving economic conditions in the EU mean that credit is becoming easier to access. Aldemore reports that the median interest rate for small businesses fell by 0.6% between February and November 2013.

Both falling insolvencies and better borrowing have been enabled by interest rates, which have been held at a historic low of 0.5% since 2009 in an effort to incentivise lending.  Therefore, many businesses are cautiously looking into the medium term and predicting a tougher time when finance is harder to come by and repayments are more expensive.

At the very least, the Bank of England has stated that interest rates won’t rise until 2015. And while initially stating that interest rates will be linked to unemployment, rate setters have suggested that more sustainable growth may be necessary before raising rates. Which is good news for SMEs – but interest rates still represent a source of worry for many. 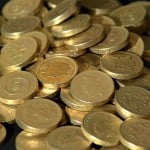 Although Chancellor George Osborne said that the continued economic confidence testified to the fact that Britain was “coming back”, Shadow Chancellor retorted that millions of people are “still feeling no recovery at all”. While this may be true for large swathes of the country, this recovery has been principally fuelled by consumer spending.

Thanks again to low interest rates, numbers of people are now investing what money that they’ve been able to save during the financial crisis. Principally, a lot of this money is being invested in the housing market, as the Government’s Help to Buy scheme has accelerated demand in the housing market. Sales at furniture, carpet shops and no-food stores rose by 9.6% on the previous year – a key factor in the GDP of services rising 0.8% in Q1.

However, small manufacturing enterprises are still having it hardest with the highest cost inflation (1%) – showing that perhaps the Government’s efforts to restore the British manufacturing base still has a way to go.

Confidence is on the up

It’s clear that B2C small businesses, as well as those linked to the property market, have more reason than most to be optimistic. On the whole, however, it seems that SMEs are becoming increasingly assured – even if GDP is still 0.6% below the peak of Q1 2008.

A survey at the end of 2013 from the Federation of Small Businesses (FSB) said that 56% of businesses were confident and planned to grow either moderately or rapidly in the next year. Some SMEs affected by the continuing downturn may still be slightly hesitant, but the majority are now viewing the recovery from a ‘glass half full’ perspective. Things, it seems, are on the up.

What Are the Most Marketable Business Skills Today?