• …but fears over downward pressure on fees diminishing

Accountancy firms are increasingly concerned that they may not have enough capacity to meet demand as business picks up, harming profitable growth, says Bloomsbury Professional, a leading tax and accounting information group.

According to research by Bloomsbury Professional, 61% of accountancy firms said that lack of capacity to meet increasing demand posed a high or medium risk to their profitable growth – up from 46% the previous year.

Accountancy firms are also increasingly worried by growing wage bills, with firms forced to raise salaries to retain staff as the jobs market recovers.   36% of accountancy businesses now rate this as a risk, compared to just 23% the year before.

“As the outlook for UK business in general improves it is creating a positive knock-on effect for the accountancy sector, but there remain several significant risks ahead.

“Ensuring that accountancy firms are prepared for the anticipated uptick in workload is crucial if they are to capitalise on the growth opportunities amid the recovery and maximise their profits. At the same time, they are aware that competition for talented staff will quickly heat up and are recognising that they may have to pre-empt that with higher pay rises sooner rather than later.

“If those pay rises kick in before the firm’s own workload increases or before fee rates improve, then it will certainly hurt profitability.”

However, fears over downward pressure on fees are diminishing. Competition between firms over fees was rated as a threat by 73% of firms last year, down to 58% this year, and half see pressure from clients to reduce fees as a risk, down from 69%.

Martin Casimir, Managing Director at Bloomsbury Professional explains: “Competition over fees has become less cut-throat than it was as economic conditions have improved. However, one lasting after effect of the recession has been the increased amount of fixed-fee work being undertaken.

“Having been forced to work on that basis when the recession was at its worst, firms are now finding it difficult to go back to their traditional charging models. Fixed-fee arrangements are proving to be very popular with clients who like the certainty of knowing how much a particular piece of work is going to end up costing.”

“The challenge for firms is to make fixed-fee deals competitive without under-pricing. Many are still finding it difficult to price projects accurately. Until they find a tried and tested formula that works there is a real risk that this could hit the bottom line.”

Fears over late payments by clients and concerns over their credit-worthiness are receding. 56% of those surveyed said that clients paying late was a risk – down from 76% last year when it was the single most pressing concern. 39% said that the credit risk of clients was a threat compared to 49% the year before.

“A year ago, clients’ ability and willingness to pay on time and in full loomed far larger as risk factors than they do now that more businesses are on a firmer footing. Today, the challenge for partners is how to harness growth and ensure that the extra work they can now take on is as profitable for them as possible,” adds Martin Casimir.

What do accountancy firms say threatens their profitability? 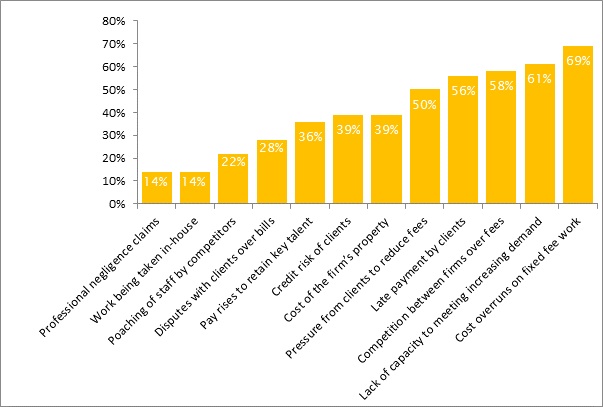