Advertised salaries grow annually for first time since the recession

On a yearly basis, salaries increased for the first time since the recession, with advertised salaries up 0.9% compared to July 2013, according to the latest UK Job Market report from Adzuna.

There was also a 2.9% increase month-on-month in July, the fourth consecutive month in which wages have grown.

Businesses are now willing to pay more to attract skills with average salaries reaching £33,877 as jobseekers per role reached a record low in July, with 1.14 jobseekers applying per role, down from 1.21 in June.

“Despite a constant stream of negativity towards UK wages, there is genuine cause for optimism. Advertised salaries have grown annually for the first time since the recession, a sign that people may at last begin to feel the economic recovery in their pockets. The UK job creation boom has become a double edged sword, creating record highs in employment rates at the expense of stagnating wages. For once we can see good levels in both job creation and wage increases. And as the UK motors on towards full employment, we may well see wages increase at a higher rate as employers begin a bidding war for skills.”

The job market recovery in the Midlands and North of England has been buoyed by an accelerating UK manufacturing industry. Average advertised salaries in manufacturing hit a two year high in July, up 15.9% year-on-year to £29,507. Further signs of positivity in the sector abound, with the number of advertised manufacturing vacancies increasing to 15,912 – almost double July 2013 levels (7,645).

The news comes amid recent figures showing that UK manufacturing is in its 14th consecutive month of increased employment alongside strong output levels.  Limited wage growth and business tax cuts have now allowed the UK to be the most efficient manufacturing country in Western Europe.

Specifically, the UK car manufacturing industry has been at the heart of the North’s catch up with other areas of the country. UK car production rose by 21.3% in Quarter 1 of 2014 to an impressive 133,437 units . Car manufacturers such as Nissan in Sunderland and Jaguar Land Rover in Coventry still choose the UK as a production hub. There has also been a new wave of industry investment, with Hitachi trains announcing a new factory in County Durham.

Andrew Hunter, co-founder of Adzuna explains: “Whilst the UK has somewhat lost its mantle as the Workshop of the World, there is no denying manufacturing in the UK is finding its feet once more as the bedrock of the British economy. The North’s combination of cheaper running costs, spare labour capacity and cutting edge innovation is beginning to ensure the economic recovery is felt in the Northern regions.

“Regions such as the North East and West Midlands were hit particularly hard by the economic downturn, and have a lot of ground to make up. This recovery is only just taking effect in some parts of the country, six years after the financial crisis began. This recent manufacturing success story has been a long overdue boost for the North. Through steely resilience and a new found entrepreneurial spirit, the North is reinventing itself as an economic powerhouse.”

Andrew Hunter explains: “This unprecedented growth in both graduate job vacancies and salaries is a statement of confidence from UK businesses. Firms can now afford to take on more entry level staff, feeling confident that there will be the resources to pay their wages for years to come. For the first time in many years, it appears that there is a slight role reversal taking place between graduates and employers. Firms are now willing to pay more to attract to graduates as they compete for skilled entry level workers. The job market remains tough for graduates, but the playing field is showing some signs of levelling out.”

Salaries across the nation

All regions of the UK apart from London saw salary growth in July. The North East, West Midlands and Yorkshire were among the regions with the highest wage growth in July, as the North/South rift begins to show signs of healing. London average salaries have fallen by 1.0% in the past twelve months as the capital struggles to compete with the rest of the UK’s wage growth

On the disparity in salary growth across the nation, Andrew Hunter remarks: “London’s labour market flexibility is one of its real strengths. The capital has become a hub for both graduates and start-up firms, which goes some way towards explaining the slow yearly salary growth. An uptick in lower paid hospitality and customer services roles has also dragged down the capital’s average wage. All the while, London’s wide array of social and cultural attractions continues to attract jobseekers to the capital – and employers haven’t had to fight so hard to attract the best staff. But this may change as more new opportunities open up further afield. London employers may need to up their game – and wages – to stay competitive.” 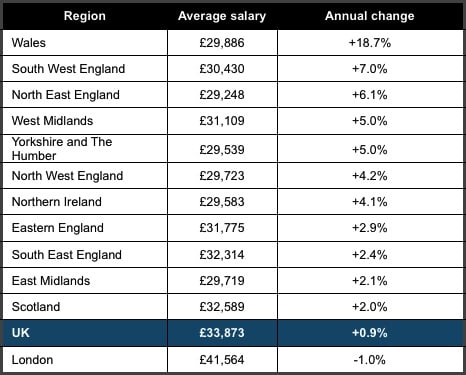