• Advertised salaries rose 0.1% in January after flatlining in Q4 2014

• Number of advertised vacancies dips 1.6% in January and number of jobseekers increases for the first time in 11 months

• Conversely, the number of benefit claimants halved over the two years to January

• These factors combine to bring jobseeker per vacancy ratio up to 0.9 – the first such rise since the start of 2014

• Sunderland struggles with 5.63 jobseekers for every available vacancy, making it the worst place in the UK to find employment

The average advertised salary grew in January, ending three months of consecutive stagnation, according to the latest UK Job Market Report from Adzuna.co.uk.

After flatlining in Q4 2014, the average advertised salary has shown signs of improvement in January with a 0.1% month-on-month increase to £34,589. This small monthly uptick is backed up by a healthy 8.1% year-on-year improvement. The average advertised pay packet has contained an extra £2,477 compared to January 2014, according to real wage data adjusted for CPI inflation.

But the expected January jobs boom did not materialise. In fact, there was actually a minor reduction in advertised vacancies, falling 1.6% month-on-month to 952,859 in January. In previous years, January has seen an increase, (0.9% in 2013, 3.1% in 2014), making the downturn at the opening of 2015 even more surprising.

This decrease in the number of advertised job vacancies has driven up the average number of jobseekers per vacancy for the first time in a year. There were 0.9 jobseekers for every advertised position in the UK in January, up from 0.85 in December. This is the largest such increase since January 2013. However, the number of benefit claimants in January 2015 has halved (53%) from where it stood two years ago, falling from 1,581,838 to just 852,934 according to the latest labour market statistics from the ONS.

“Normally we would expect a January jobs boom to kick off the New Year, but there are actually fewer advertised vacancies than we saw in December 2014. But it’s not all bad news – strong performance across 2014 has reduced the jobs deficit, leaving us firmly anchored with a quarter more vacancies than we had at the beginning of last year. Likewise, a slight increase in the ratio of jobseekers to available vacancies is still a far cry from the previous state of the labour market. You only have to look at reductions in the number of out-of-work benefit claimants which have halved from January 2013 to see that.

“We’re continuing to see real wage growth off the back of low inflation. It’s not just a technicality, either – after three months of wage growth stagnation across Q4 2014, we’re seeing the average advertised pay packet start to rise in the New Year. For all these encouraging signs for 2015, this is just the opening salvo. There are still more people looking for paid employment, but many lack the skills to gain entry into the available professions. The past month has seen significant promises on apprenticeships from a range of political parties – let’s hope these commitments to closing the skills gap are honoured after the general election.”

The North West of England has fallen back from the head of the pack in terms of average advertised salary increases. The North East (14.0%), Yorkshire and The Humber (13.5%), and Eastern England (12.4%) are now vying for pole position as salary increases in the North West (9.2%), previously among the fastest growing, slowed to just above the UK average. Wales (1.7%) and Scotland (2.0%) are both lagging behind. 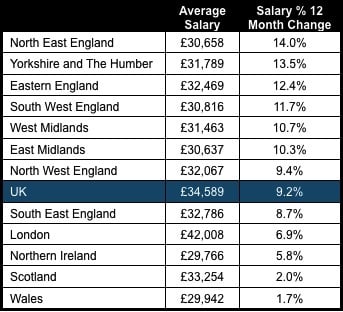 “Salford has rocketed down the rankings of cities with oversubscribed job vacancies. Despite coming out as the worst city for jobseekers across 2014, there are now just under three jobseekers per vacancy. This represents a marked improvement for an area where jobseekers have previously struggled. The opening of Media City in Salford a few years ago didn’t provide an immediate fix to the unemployment problems in the area, but recent developments such as TalkTalk opening a large operation there and plans for a new Digital Village being underway mark a shift in Salford’s fortunes.

“Sunderland has risen to first place by the same metric, but it’s important to look at the figures themselves. In January last year, it had nearly seventeen jobseekers for every available position. Despite being the most difficult place to find a job in the UK, competition is just a third of what it was. There are no quick solutions or easy answers to this division between North and South, but the sheer rate of Salford’s improvement shows what is possible. It should provide hope for improvement in other areas – especially those cities left behind in its wake.”

Adzuna’s figures show that there are currently 16,107 apprenticeships in the UK, with engineering being the largest provider of opportunities. However, these schemes are not concentrated in the areas which are struggling the most. London and the South East together hold 28% of all apprenticeships, despite comparatively low competition for jobs and below-average salary growth in both areas. The combination of high wage growth and high competition – a primarily Northern phenomenon – is indicative of employers attempting to attract skilled candidates from other regions.

“People want to work, but many lack the skills to match the available jobs in their areas. This is particularly true in the North, and yet apprenticeships have gravitated towards the comparatively successful South. It’s a bit of a chicken and egg situation: which came first, the apprenticeships or the successful companies willing to train up skilled workers?
“Apprenticeships are the kind of investment that take some time to pay dividends. It’s understandable that during tough times, employers weren’t thinking this far ahead – the pressures of keeping employees in work and companies afloat overrides the kind of long-term thinking exhibited by apprenticeships. It’s time for companies in the North to make themselves heard. Their flourishing manufacturing, trade and construction sectors are building the foundations for tomorrow’s economy. With help, they’ll be able to rise to the challenge of securing the future of Britain’s skilled labour market too.”

Trade & Construction jobs back with the top performers

Though Administration (20.5%) and Customer Services (17.4%) maintained their lead in terms of year-on-year salary improvements, perhaps more significant is the return of Trade & Construction Jobs (12.1%) to the top-five leaderboard. The average advertised salary in this industry in the UK was £39,156 in January, up from £34,936 in January 2014.

Andrew Hunter, co-founder of Adzuna, explains: “Trade & Construction jobs are back up there with the big-hitters. They led the salary turnaround as we came out of recession, and the continued high performance of this core sector is a boon for the economy as a whole. It’s promising, but we have to remember that these are advertised salaries and not payslips themselves.

“As much as it signals success for the Trade & Construction industry, the year-on-year increase also displays the desire to fill these roles with qualified professionals – a need that isn’t being met at the moment. Apprenticeships are the logical route around this problem, combining a clear path to employment with the ability to direct young people towards the skills and experience that are needed.”

Only the Energy Oil & Gas (-3.9%) and Creative & Design (-0.1%) sectors experienced wage decreases in January compared to the same month last year. Average advertised salaries in these sectors were £45,494 and £30,313 respectively.

“The Energy, Oil & Gas crisis has deepened in January as the price of crude oil remains low and doesn’t seem set to rise any time soon. Creative and Design jobs are a new entrant onto the list of most stagnant job areas. It’s a surprise, given statistics from the Department for Culture, Media & Sport which show a burgeoning sector growing at three times the rate of the wider UK economy. The sector might be growing, but salaries are struggling to keep up – as is often the case with careers in the arts, these positions are simply oversubscribed. Nevertheless, this slight slip in salaries is hardly cause for alarm in the face of booming growth for the sector as a whole.”

Don’t Be Fooled by Libya—This is a Failed State