Advertised vacancies outstrip jobseekers for first time since the recession

The number of job vacancies has overtaken the number of job seekers for the first time since the recession, according to the latest UK Job Market Report from Adzuna.co.uk.

Advertised salaries increased 4.3% year-on-year in October to £34,670, outstripping a low Consumer Prices Index inflation rate (1.3%) to provide the UK with its first taste of respectable real wage growth since before the recession. This is the third consecutive month in which annual salary growth has kept its leading margin on CPI; in real terms, advertised salaries have gone up by £997 over the year to October.

Andrew Hunter, co-founder of Adzuna, explains: “For the first time in six years, the number of jobs on offer has eclipsed the number of people looking for work. Job applicants are in a much stronger position than they were a year ago – as employers offer higher salaries in the hope of attracting the very best talent. Over half a million fewer people are unemployed than a year ago. It might feel like a rare planetary alignment to those who started out their careers in the midst of a global recession, but annual salary growth maintaining a lead on inflation for three months on the trot is an excellent sign.

“But even though the recovery is rocketing forward, it’s important to keep our feet firmly planted on the ground. The increase in job vacancies is aided in part by a natural swell as the festive season approaches. Nevertheless, the upturn in temporary seasonal jobs is to be welcomed with open arms as it paves the way for real wages to reach the people that need it most in time for Christmas.”

The average advertised salary for graduate jobs was £26,438 in October 2014 – a year-on-year increase of 15.7%. This places graduate jobs far ahead of any other sector in terms of their annual salary increase.

Andrew Hunter, co-founder of Adzuna, said: "After being stuck in the pipeline for a few years, the UK’s graduates are finally able to start making serious career moves. The large increase in the salaries of advertised graduate jobs clearly reflects this as the entry-level bottleneck starts to ease. People who have been effectively sitting in traffic at the bottom of the career ladder are now being given the promotional green light. This is especially true of industries like IT and Manufacturing that have recently moved back into the fast lane.”

Manufacturing and IT salaries increase – especially in startup companies

Advertised salaries in Manufacturing jobs grew by 10.4% year-on-year in October, bringing the average to £30,578 – the fourth biggest increase by sector. Large businesses start to see the manufacturing potential of the North in October, assisted by schemes like the North East Enterprise Zone. Hitachi Rail Europe has cemented its position in the North East by investing in a new design office in the region, while Siemens has major plans to increase the capacity of its turbine-blade manufactory site in Yorkshire to allow it to export.

Advertised IT salaries grew 10.2% year-on-year in October to £44,918. There were 8,554 vacancies available in startups and young businesses in the UK in October 2014, up 80% on last year. The average advertised pay rates for IT sector jobs in startup companies topped £40,000 in October, 26% over average technology sector salaries in Britain.

Andrew Hunter, co-founder of Adzuna, explains: “The higher wages being offered by young technology businesses is likely being driven by an oncoming trend in startup companies now better described as “scaleups”. Several startups in London and the South East are seeking to increase their capacity having already established their reputation. This brings with it an attendant increase in the value of IT positions to these companies as infrastructure makes greater demands on their resources. In these smaller companies, the need for talented and experienced professionals to oversee the upscaling process leads to fierce salary competition – hence the stratifying of technology salaries which places advertised startup salaries above the average. They need to attract the heavy hitters in order to move up a league.”

Every region of the UK saw annual advertised salary increases in October apart from Scotland. North of the border, average advertised salaries fell 0.9% year-on-year to £33,011 as the nation’s economy seeks to regain its inertia after the uncertainty brought about by the referendum. Scotland has been hit particularly hard by a general downturn in the Energy, Oil and Gas sector in October. Faring far worse than the UK in general, salaries in this sector saw an annual decrease over seven times the size of the rest of the UK, and two times fewer vacancies year-on-year.

Almost all UK regions have seen substantial increases in advertised salaries compared to last year. The Jobs Growth Wales initiative keeps Wales in place at the top of the table with an annual increase of 12.8%. However, its position is no longer quite so uncontested. Strong growth for manufacturing and IT sectors is reflected in strong performances year-on-year from the South West (9.4%), Yorkshire & the Humber (9.8%) and the North East (10.2%). Conversely, advertised wages in Scotland buck the trend towards annual increase and actually drop by 0.9% in the wake of the independence referendum.

Andrew Hunter, co-founder of Adzuna, comments: “Scotland is currently feeling the after-effects of a period of uncertainty – absorbing the echoes of a loudly-beaten national drum. Much of Scotland’s talent and business has been seriously considering moving elsewhere in the face of several crucial known unknowns from currency to EU trade regulations. Advertised salaries have suffered as companies regain their balance. The effect of this realignment on annual change of advertised Scottish salaries isn’t helped by the flagging energy, oil and gas jobs compared to last year. The energy and fuel sector is absolutely key for Scotland’s economy, as the referendum debates made clear to the UK’s general population.

“However, just as Scotland feels the pinch in October as one of its key job sectors underperforms, the North East and Yorkshire & The Humber have all taken full advantage of the opportunity to play to their strengths as jobs in the manufacturing sector see a twelve-month advertised salary increase of 10.4%. With increasing business, these Northern powerhouses are raising salaries in order to attract the very best talent – a possible sign of a skill shortage in the North’s manufacturing talent-pool.” 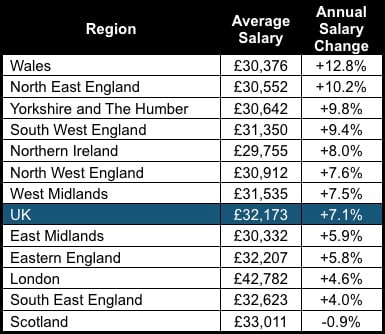 20% of graduates earn less than the A-level average wage