The Association of Investment Companies (AIC), in its response [1] to the FCA’s ‘Illiquid Assets and Open-Ended Funds’ discussion paper, has recommended clearer disclosure of the risks posed by open-ended funds that invest in illiquid assets. The AIC has also recommended that fund providers should explain why the chosen fund structure is appropriate for its underlying assets.

Ian Sayers, Chief Executive of the Association of Investment Companies said: “On performance grounds alone, there is a compelling case for investment companies when investing in illiquid assets. This is demonstrated by the substantial outperformance of the investment company Property Direct – UK sector in comparison to equivalent open-ended funds (see table below).

“The structural advantages of investment companies were also brought starkly into focus by the Referendum vote, when most open-ended property funds had to take some form of action in the light of changing sentiment, including repricing and suspending redemptions. Investment companies were not immune from market pressures, of course, and we saw discounts widen in the immediate aftermath of the Referendum result, though these have recovered since.  However, investors were still able to trade throughout this period if they chose to, instead of having to wait for months to sell.

“Even today, many open-ended funds are holding substantial amounts of cash to provide protection against redemptions, sometimes as high as 25% or more.  This is particularly relevant for income seekers, as such balances will be earning very low returns, whereas investment companies can remain fully invested, delivering a higher yield.

“The arguments in favour of using the closed-ended structure for illiquid assets are so strong that you have to question why the open-ended sector’s assets in UK Direct Property are four times bigger than the investment company sector.  So we are calling for clearer disclosure of the risks associated with a mismatch between the liquidity of the fund and its underlying assets, as well as asking fund promoters to justify their reasons for the fund structure chosen, and not simply to default to the open-ended option.” 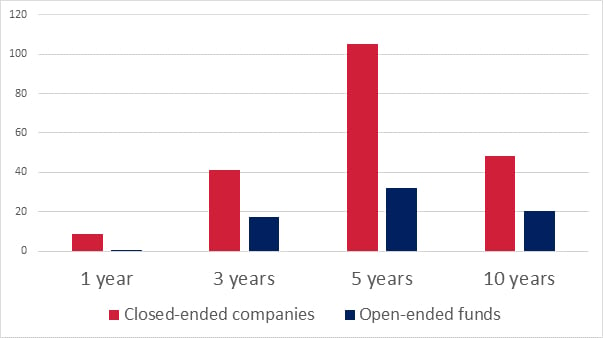 Four amazing digital businesses that aren’t based in London