Largest net decrease in number of companies on AIM since 2012

The number of companies listed on AIM fell by 52 during 2015, as low oil prices and corporate governance concerns over Chinese companies led to a sharp rise in de-listings, reveals research from UHY Hacker Young, the national accountancy group.

This is a notable downswing in AIM’s fortunes, which had stabilised with the net increase of four additional companies in 2014, and is the largest net decrease in the number of companies on AIM since 2012 (see graph below).

UHY Hacker Young adds that the impact of falling commodity prices has seen 12 mining companies de-list from AIM, whilst the collapse in oil prices pushed 11 oil & gas companies off the AIM market in the last 12 months.

“In the last year AIM’s strengths have proved to be its weakness. The success of AIM has long been built on its appeal to mining and oil & gas companies and its attraction for many Chinese companies seeking to raise capital and gain a market for their shares. But a collapse in oil, copper and iron prices and the slowdown in the Chinese economy have made 2015 a tough year for AIM.

“In addition to the impact of the waning of China’s economy there have also been concerns surrounding the corporate governance of some Chinese companies on AIM. Both of these factors may have led to some NOMADs feeling under pressure to reconsider their advisory roles to Chinese companies. Our research does reveal an increase in companies exiting AIM as a result of NOMAD resignations.”

The London Stock Exchange is understood to have written to all NOMADs (financial advisers to AIM listed companies – needed to maintain a listing on AIM) that act for Chinese companies in 2015 drawing attention to the need to review the systems and controls within those companies.

Says Laurence Sacker: “A number of Chinese companies listed in the US and Hong Kong that raised money from investors left those shareholders nursing bruising losses so it’s only right that AIM should have reviewed its own position and it seems that it was decided to tighten controls in this area.”

UHY Hacker Young says that the most common reasons for companies de-listing from AIM during 2015 were:

Some of the year’s most notable de-listings included: 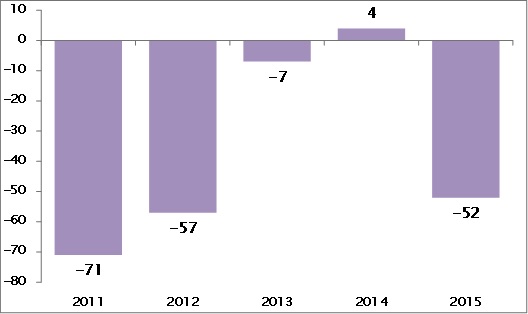 There were 39 companies which listed on AIM during 2015, the lowest number since 2009 when just 13 companies entered the market. 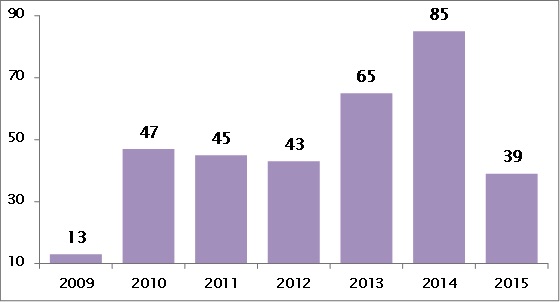