The Green Party welcomes the European Commission’s decision to launch legal proceedings against the UK for its failure to cut excessive levels of nitrogen dioxide, a toxic gas. The UK is the first European country to face such action.

“Air pollution causes 29,000 early deaths a year in the UK and it’s a disgrace that the Coalition government have largely neglected this worsening problem. There has been far too little action from authorities despite 15 years of warnings and several extensions and postponements granted to the government.

“This is another example of this government's inaction on life-and-death green issues and another nail in the coffin of the Coalition’s frankly laughable claim to be the ‘greenest government ever’. If we want real change we need to vote for real change.

“Action to reduce air pollution – such as reducing traffic levels is essential if we are to have cleaner air. Only such moves would make our towns and cities cleaner, healthier places for people to live and work.

Keith Taylor, the Green Party MEP for South East England, and, like all Green elected representatives, a campaigner for clean air, said: 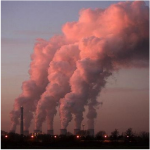 "The EU is taking legal action against the UK because our government has failed to protect the health of British citizens. With excessive levels of Nitrogen Dioxide in our air causing major respiratory problems, and leading to premature deaths, it's disgraceful that our Government have refused to act.

“The EU sets limits on air pollution, which the UK has failed to meet, and has even ignored the EU's offer of a time extension to meet these limits. Our government's failure to introduce tough enough measures to clean up our air simply isn't good enough.

“Regions across the UK are exposed to these dangerous levels of pollution, including my own constituency in the South-East. With 29,000 people dying prematurely in the UK each year because of air pollution, it's a relief that the government is finally being held responsible for its failure to act."