The year was also Airbus' most valuable gross order intake (List price US$ 240.5 billion). By year end, the backlog had climbed to an industry wide record of 5,559 aircraft, valued at US$ 809 billion at list prices, or eight years production.

Aircraft deliveries in 2013 were up for the 12th year in a row, beating the initial target and surpassing the previous record set in 2012 (588) by an additional 38 aircraft.

At 2013 year end, Airbus commanded 51 per cent gross market share (aircraft above 100 seats). Decisions by customers to move towards larger aircraft in all segments (A321, A330-300, A350-1000 and A380) is having a positive result on revenues, complementing Airbus' lead in both single aisle and widebody aircraft markets.

During the year the A320neo surpassed 2,600 orders while strong sales of the A320ceo continued with more than 1,000 sold since the NEO was launched. The A350 XWB had significant commercial breakthroughs especially with a first order from Japan, and the A380 coninued to dominate the Very Large Aircraft market with 50 new orders.

Signalling Airbus' successful transformation to a more agile company, 2013 was also notable for the A350 XWB first flight. Test flights are progressing well with two aircraft having accomplished over 800 flight hours. 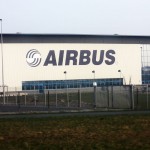 Certification is targeted for Q3 and Entry Into Service for Q4 2014. The A330 new longer range and regional variants were launched, A330 production reached a new record high of rate 10 per month and single aisle remained stable at rate 42.

In 2013, Airbus Military delivered 31 aircraft including seven A330 MRTT and two A400M for the French Air Force, confirming the programme is well back on track.

"I thank the Airbus teams for these great achievements. The transformation of our company into a simpler, more agile and faster one is clearly taking shape. We are producing aircraft at all-time-highs and selling our market leading products at record levels," said Fabrice Bregier, Airbus President and CEO. "These benchmark results are feeding nicely into our profitability targets, and I am proud to report that the trajectory is showing strongly upwards. To expand our leadership in single aisles and widebodies, 2014 will be significant with the first flight of the A320neo and the Entry Into Service of the A350 XWB."