Since it is mandatory when writing about The Shins to mention Zach Braff’s 2004 film Garden State, we may as well get it out of the way early. When Natalie Portman’s Sam tells Braff’s character in an early scene that The Shins’ music could change his life, she isn’t kidding – even though she is a compulsive liar.

Three albums of arresting, off-centre songs with beautifully pitched lyrics put James Mercer and his band in territory that few ever reach – achieving critical approval and commercial success at a level that didn’t threaten to become damaging, The Shins remained thoroughly credible; alternative, without that ever being a dirty word.

Portman spoke of The Shins of old. In the half-decade that has elapsed since the wonderful ‘Wincing the Night Away’, Mercer has dispensed with his entire band and dabbled in electronica with Danger Mouse on their side project, Broken Bells.

All of which means that it would be understandable, if not altogether fair, to approach ‘Port of Morrow’ with some caution. Mercer himself frequently sounds tentative (‘My life in upturned boat, marooned on a cliff’ he sings on first single ‘Simple Song’) but he is not without the help of his friends. Foremost among these is Danger Mouse himself, whose influence is felt on opener ‘The Rifle’s Spiral’, which is fortified by a chunky beat and celestial bleep sequences. It still sounds like The Shins, although maybe The Shins +1, rather than Mk. II.

In common with previous records, Mercer front-loads his best songs, getting his best lilt on during ‘It’s Only Life’ and sounding like Gruff Rhys covering The Kinks on ‘Bait & Switch’. ‘No Way Down’ begins as fluently as anything on ‘Chutes Too Narrow’ (still the best Shins long player) before drifting away into a non-ending, its ambitions only partly realised. 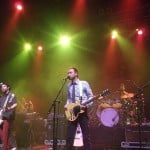 This is a pattern that recurs on ‘Port of Morrow’. As good as these ten songs are – and in places they are very good – Mercer never quite manages to outrun his own back catalogue, with ‘September’ a case in point. Viewed in isolation, it is a gentle, undulating love song, accomplished and not indelicate. However, it would be an altogether more fulfilling thing if it didn’t serve as a reminder that Mercer is capable of greater lucidity and craft – as on Broken Bells’ ‘October’, for instance.

Perhaps it was unfair to expect more after such a level of upheaval, but the end result is a little underwhelming. Still, an off-colour Shins record is better than no Shins record at all: no longer life-changing, perhaps, but definitely life-enhancing.