The Russian protest leader, Alexei Navalny, who became a thorn in the side of Vladimir Putin by accusing the Russian president of corruption, has himself now been jailed for embezzling from a timber firm.

The 37 year old campaigner has denied the charges and condemned the trial as politically motivated. He has also called on his supporters via Twitter to continue the anti-corruption struggle.

"The conviction of Alexei Navalny is a further disturbing sign of political repression in Russia.

"From the treatment of Pussy Riot to the new Bill that criminalises LGBT freedom of expression, the voices of civil society are suffering from increasing pressure, and now we are seeing direct political voices receiving the same treatment. 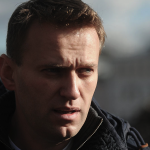 "The international community needs to send a clear message to Russia that this is not acceptable behaviour, and stronger action needs to be taken in suspending cooperation across a range of areas.

"The fate of the 2014 Sochi Winter Olympics must also come under increasing question. No competitor or spectator can be sure of safety and freedom in Russian’s current Â political climate."

But as ever there is money at stake so one would doubt that much more than a few words and some public hand-wringing will take place. And as for the Olympics, they will go ahead as planned – I shudder to think what would happen to anyone foolish enough to make a public display of protest in Russia over that particular period, it would make the imprisonment and deportation of someone getting in the way of a well known boat race look extremely mild in comparison.