Alhokair will also open M&S’s new flagship store in Baku, which will see M&S enter Azerbaijan for the first time this autumn.

Alhokair has worked in close partnership with M&S since 2001 and currently operates 19 M&S franchise stores across Saudi Arabia, Kazakhstan, Armenia and Georgia. Alhokair has continued to grow M&S’s presence in Saudi Arabia and the Caucasus, which most recently included the opening of the retailer’s world-first standalone Lingerie & Beauty stores in Saudi Arabia in March. 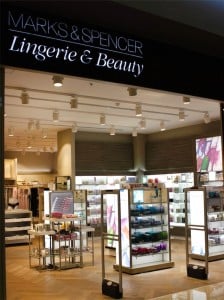 “M&S has tremendous appeal to consumers in all the markets in which we operate their stores currently, and further afield.  Our focus is on driving fast, efficient and profitable growth for their core business and new store formats.

Mark Koprowski, Marks & Spencer’s Regional Director, Middle East and CIS, said: “Our franchise partnerships are central to our international growth strategy. As one of the world’s leading retail operators, Alhokair offers us extensive retail expertise, local knowledge and access to some of the region’s prime shopping destinations. Through our successful partnership, we’re delighted to continue to build our presence in Saudi Arabia and the Caucasus to bring more of our quality, stylish fashions to customers across the region.”

Simon Marshall, Chief Executive of Alhokair, continued: “It’s a great privilege to have been chosen by M&S to develop and launch the Lingerie & Beauty brand format; it's a global first. Lingerie & Beauty draws on the rich heritage and unique position which Marks & Spencer enjoys within the intimate apparel market – they continue to have the highest market share in the UK, with strong growth internationally.  We embrace the opportunity to continue to build their business in Saudi Arabia and other markets with ground-breaking and innovative retailing.”

With spectacular views over the Caspian, Port Baku Mall is the country’s new luxury shopping destination and will soon be the home to M&S’s new 1,700 square metre flagship store. From autumn, customers in Azerbaijan will be able to shop M&S’s extensive range of stylish and exceptional quality fashions across womenswear, menswear, kidswear and lingerie – as well as accessories, footwear, and beauty products for the first time.