It looks like Aliens who are visiting this planet may be more interested in cows than human beings. 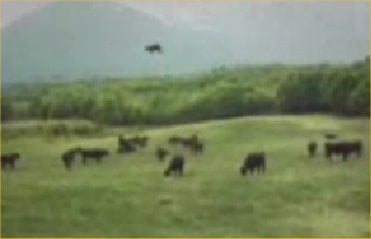 According to The Sun, the FBI's on-line website says Aliens have been abducting cows and other livestock and conducted bizarre experiments on them.

Reports sent by special agents in the field (excuse the pun) to directors in the FBI point towards an unexplained phenomenon which had everyone from farmers in Colorado, Nebraska andÂ  New Mexico (The site of the Roswell incident) to the White house itself panicking over the potential threat of flying sauces and the creatures that piloted them.

In the late 1970s more than 8,000 cows were abducted by UFOs, mutilated then dumped from the sky.

Some the mutilations included removal of eyes, reproductive organs, tongues and lips with many drained completely of blood.

Attorney Generals, FBI agents, Police officers, and the obligatory unreliable farmer are all documented as expressing concern over the spate of animal abductions.

By the way…..why would we not believe farmers? And why are authoritative people like FBI agents, Police officers and Attorney Generals regarded as more credible as witnesses?……We all know corruption affects mostly those who are corruptible i.e. the aforementioned professions….just a point of order there.

There are several sites devoted specifically to cow abductions like cowabduction.com …..some are tongue in cheek (second pun).

The truth is usually though stranger than the strangest thing you could conceive in a moment of errrrm strangeness.

Prince William: The man who will be king

Cheryl Cole will be a judge on American X Factor