Research reveals that thousands of Britons could be saved from the devastating effects of serious illness such as heart disease, diabetes and brain tumours, simply by attending a regular eye test.

The aim is to raise awareness of the importance of regular eye tests to mark the start of National Eye Health Week (21-27 September 2015), as early diagnoses is seen as the key to saving lives. Brain tumours, which can be detected during an eye examination, cause swelling on the optic nerve; a routine eye test may save a life should the tumour be caught before it spreads, or causes permanent damage to brain tissue.

While the NHS recommends an eye exam every two years, just over half of adults in the UK only visit an optician once every five years, with 8% admitting to never having had a sight test[2]. In light of the current difficulties Brits face when securing at GP appointment for aliments and illnesses, the public are being urged to take sight seriously and avoid a potentially bleak forecast for the nation’s eye health. 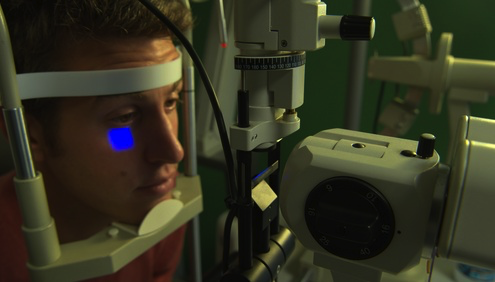 Research shows that 37% of adults put off having an eye test due to cost concerns, so to reinforce its commitment to eye health, Vision Express will be offering free eye test for National Eye Health Week (21-27 September 2015). It has also commissioned its Vision Van a large mobile unit equipped with the very latest eye testing technology. It will take to the streets during September in eye health ‘hotspots’ in London, Bournemouth, Cardiff, Hull and Manchester, and is open for testing from 10am to 5pm.

Last year a significant 85% of people tested on the Vision Van in 2014 required a new prescription, and 1 in 10 were referred to a GP. This year the Vision Van will be touring pockets of the UK – including Manchester – chosen based on prevalence of vision conditions such as macular degeneration, glaucoma, retinopathy and cataracts.

• Tuesday 22 September: Bournemouth because it is the largest town in Dorset, which has the most macular degeneration and cataract sufferers in the UK (8.5% and 1.6% of the local population, respectively).[4]

• Wednesday 23 September: Cardiff, because a Vision UK report confirms sight loss in Wales is 9% higher than in England. Furthermore, the county of Powys ranks highly as a hot spot for early stage macular degeneration (5.9% of the local population) [4]

• Thursday 24 September: Hull is one of the top ten areas of the UK for heavy smokers, with an average 30% smokers, and there is a proven link between sight loss and smoking. Plus, it is a top five area for poor diet, with 27% of the local population eating fewer than two portions of fruit and vegetables a day, which also impacts eye health.[3]

• Friday 25 September: Manchester, which has 49,200 stroke survivors [5]. It is within the top five areas in the UK for concentration of stroke survivors – and up to 60% of stroke survivors experience visual problems. Residents in Manchester are 48% more likely to be heavy smokers than the national average and over a quarter (27%) eat fewer than two portions of fruit and vegetables a day [3].