Almost half of Brits admit to hiding money that their loved ones know nothing about – with the average being more than £11,000, new research has found.

Over the years it can become difficult to keep track of our assets, however millions of pounds are intentionally being squirrelled away in bank accounts, bonds, stocks and shares, safety deposit boxes and even hiding places at home – from the attic to under the bed.

The study of 2,000 UK adults, carried out by wills specialists at law firm Slater and Gordon, revealed that people are leaving thousands of pounds in unclaimed assets when they die. More than half admitted that no one else would be able to access their assets if anything happened to them. Just 4% had left the details in their will and 57% hadn’t made one at all.

A third of people surveyed couldn’t remember how much they had or the details for all their accounts. Almost one in four said there could even be other accounts or investments they’d forgotten about.

Nearly a fifth suspected family members of stashing money away and 12% had found cash hidden in the home of a loved one who had died. 61% suspected they could have stashed even more. One in 10 admitted they were mistrustful of banks.

On average, men had twice as much hidden away as women and some funds yielded as much as £500,000.

Defending their nest eggs, 38% said it was theirs to do what they wanted with and 1 in 10 shielded their savings in case others wanted to spend it. 6% confessed they just didn’t trust their nearest and dearest.

People also forget about the assets they have such as old accounts that weren’t closed, or premium bonds or stocks and shares given as a gift years ago. James Beresford, Head of Wills, Tax, Trusts and Probate at law firm Slater and Gordon recalls a client who had 75 different bank accounts.

And savings added up when people included their credit in online accounts such as Paypal (67%), the lottery (16%), betting accounts (14%) and shopping vouchers (14%). 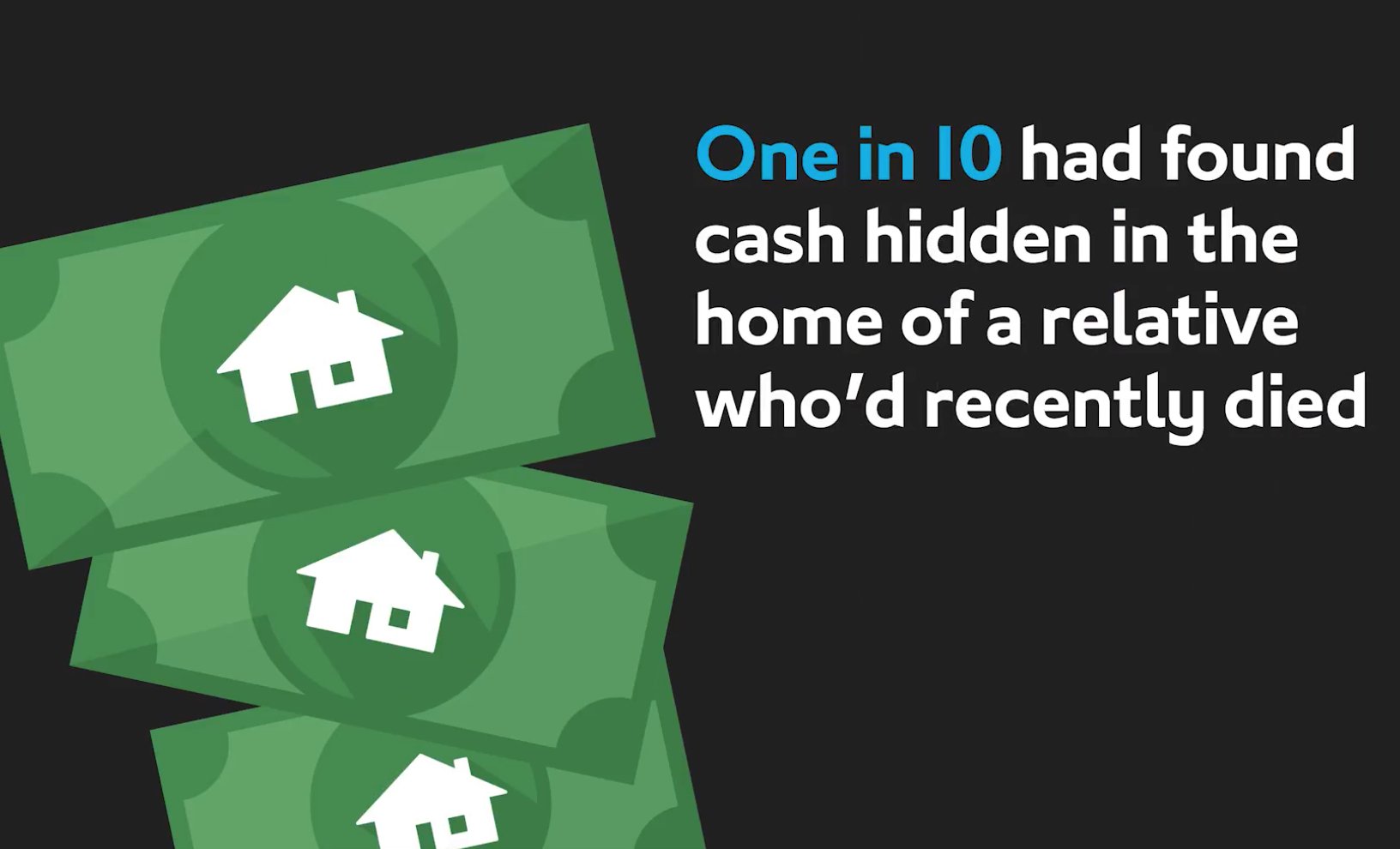 “There’s no such thing as a ‘common law’ husband or wife, which is a mistake a lot of people make. For example, if you’ve been married, but are in a new relationship when you die then your assets will go to your ex-spouse unless you specify otherwise.

“People also forget what assets they do have. These days many of us have multiple accounts, for example, and you may have old ones that you’ve switched from but forgotten to close.

“That’s why we encourage clients to make a yearly asset sheet with details of all their cash and investments as with paperless statements it’s becoming much more difficult to keep track if there’s no physical evidence.

“In most cases people save money with the best of intentions to plan for their family’s future, but that’s no use if no one knows about it other than you.”