• Professionals and all other additional rate taxpayers under more intensive scrutiny

The amount of extra tax collected by HMRC in its new campaign against tax avoidance by the “mass affluent” has jumped by 60% in the last year* says Pinsent Masons, the international law firm.

HMRC opened the “Affluent Unit” in 2011 in order to target a far wider high group of taxpayers whose income means they are not considered wealthy enough to be scrutinised by HMRCs High Net Worth Unit.

HMRC’s Affluent Unit now investigates the tax affairs of UK residents with an annual income of over £150,000 or wealth of over £1 million which makes up around 500,000 taxpayers in the UK. Taxpayers with assets worth over £20m are dealt with by HMRC’s High Net Worth Unit.

Pinsent Masons points out that HMRC’S Affluent Unit doubled in size in 2013, with the recruitment of an additional 100 inspectors and its remit was also expanded to cover those with a private wealth of more than £1 million, down from the previous threshold of £2.5 million.

“This surge in extra revenue from Affluent Unit tax investigations serves as a reminder that HMRC is widening its lines of inquiry. It is no longer focussing solely on the super-rich. People who would just consider themselves moderately successful professionals and businesspeople are now also coming under the scrutiny of HMRC’s specialist units.

“HMRC is leaving no stone unturned in terms of searching for taxes which it believes should have been paid. This unrelenting attitude is being backed up by new civil powers to pursue unpaid tax and a much more aggressive approach to prosecutions– targeted at professionals and entrepreneurs.

“Having boosted its tax take so significantly from investigations into additional rate taxpayers, it is unlikely HMRC will let up in its efforts to clamp down on tax avoidance amongst the mass affluent any time soon.”

Pinsent Masons explains that HMRC is expected to gain further powers to recover unpaid taxes. Plans were announced in the 2014 Budget, for example, to grant HMRC the ability to withdraw outstanding tax directly from the bank accounts of debtors. The proposals were diluted in November, with the added requirement of a face-to-face meeting before funds are recovered, but are expected to come into force in 2015.

In line with an increased focus on the “mass affluent”, HMRC has launched a number of voluntary disclosure campaigns targeting specific groups of professionals in recent years. For example, the Solicitor’s Tax campaign was announced last month in which legal professionals are being urged to come forward and voluntarily declare any undisclosed income before a June deadline, or face heavy penalties. Doctors and Dentists have been a previous focus of the schemes.

Pinsent Masons says that HMRC now possesses sophisticated technology to help justify its increased focus on new groups. The £45 million database system ‘Connect’ gathers real time data to help it identify groups where tax avoidance may be an issue. It draws data from multiple public and private sources, including: banks, local councils and even social media.

Pinsent Masons says that HMRC needs to carefully weigh up the benefits of increased investigations into the self-employed and businesses against potentially negative effects on the economy.

James Bullock comments: “Whilst the fact that more is being raised from compliance investigations should as a general principle be welcomed, HMRC needs to be vigilant that over-zealous use of some of its new powers does not end up being damaging to business.

“The diluting of the Direct Recovery of Debt proposals in late November – and the apparent “disappearance” of the proposed strict liability offence of offshore tax evasion are hopeful signs that HMRC is getting the message on this front.” 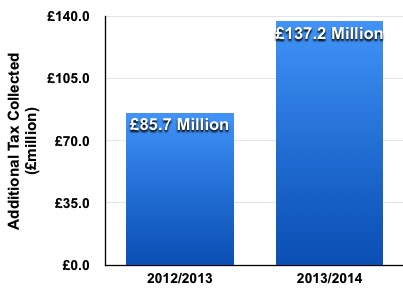