Two recent severe droughts in the Amazon region, one in 2005 and one in 2010 may cause the rainforest to change from a carbon sink into a net emitter says a recent study.

The first drought in 2005 was thought to be a one in a hundred years event. But it was followed by another in 2010 that may have been even worse. The study by Simon L. Lewis, Paulo M. Brando, Oliver L. Phillips, Geertje M. F. van der Heijden and Daniel Nepstad in Science indicated that the 2010 drought resulted in 57% of Amazonia suffering from low rainfall as opposed to 37% in 2005.

This represents a concentration of 50% of the world's remaining rainforest in one region and has been dubbed 'the lungs of the world'.

As a result of the droughts many trees are dying so reducing the ability of the forest to absorb CO2. Worse though us that the dead trees will rot and release the carbon stored up in them unto the atmosphere. Some estimates put this potential overall release as equivalent to the carbon output of the US. 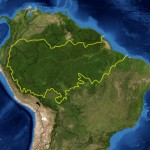 The forest usually soaks up 1.5 billion tons of carbon a year but the team involved in the study written in 2010 believe that this would not be achievable in 2010 and 2011. The study should be seen as an initial estimate said one of the co-authors as more research was needed to evaluate the number of trees killed off by the drought. The impact of forest fires had also not been included in the study.

Speaking to Sky News Online [1] one of the authors Dr Lewis of the University of Leeds said "We don't know yet if the change is natural, or if it is consistant with climate change in which case we might expect more of this in the future. The Amazon would then move from being a net absorber of CO2 to a net emitter of CO2."

Govt should invest in green energy solutions, not nuclear white elephant, says Friends of the Earth