Analyzing the US Labor Market for Recent College Graduates

Although high rates of unemployment and underemployment may be typical for recent college graduates, a new Federal Reserve Bank of New York study shows that this group is having more difficulty finding good jobs than in the past. Moreover, employment outcomes vary by major, with students specializing in technical and growing fields faring the best.

In “Are Recent College Graduates Finding Good Jobs?” economists Jaison Abel and Richard Deitz move beyond anecdotal evidence and examine more than twenty years of data on the employment outcomes of recent graduates. They find that, by historical standards, unemployment rates for the group have been quite high since the onset of the Great Recession. Moreover, underemployment among recent graduates—defined in their study as working in a job that typically does not require a bachelor’s degree—has also been rising since the 2001 recession.

The authors caution that fairly high unemployment and underemployment are not uncommon for young people after they leave college: Making the transition to the labor market has traditionally required time. However, analysis examining the quality of jobs held by the underemployed reveals that today’s recent graduates are increasingly working in low-wage jobs or working part-time. 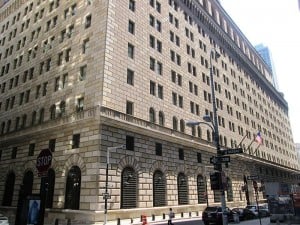 Federal Reserve Bank of New York by beyond My Ken

The authors conclude their study by investigating whether recent graduates who major in certain subjects are experiencing better labor market outcomes than others. Their results suggest that students majoring in fields that provide technical training, such as engineering or math, or those majoring in fields geared toward growing parts of the economy, such as education and health, have tended to do relatively well, even in today’s challenging labor market.

Richard Deitz is an assistant vice president in the Bank’s Research and Statistics Group. Jaison Abel is a senior economist in the Group. Their study can be read in full in the latest Current Issues in Economics and Finance.

UK funds under management at record £6.8trillion, 60% above pre-crisis peak