There are many who would have giggled with glee at Andrew Lansley’s recent misfortunes at the hands of our nurses. He’s the country’s favourite pantomime baddie of the moment (allowing I’m sure only temporary relief to everybody’s default bad guy of the year, Nick Clegg). 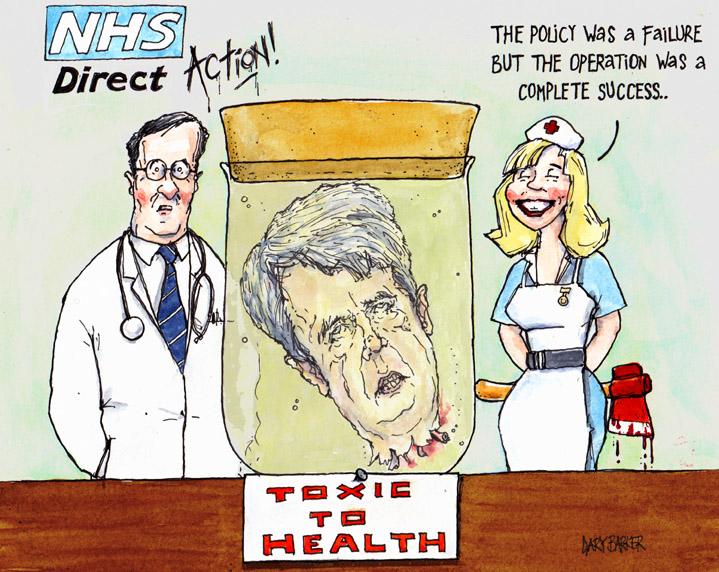 Andrew Lansley and the nurses of the NHS (www.garybarker.co.uk)

Of course Lansley’s ideological wholesale dismantling of the NHS to replace it with an essentially American private medical insurance based model is not in most people’s interests and, in my opinion, must be stopped at all costs. But I think there is a more interesting and subtle under-lying problem with all our politicians and the system that supports them in this story.

When Charles Clarke refused to attend the NUT conference and instead speak to the head-teacher’s NAHT a few years ago, hardly anyone batted an eyelid. Now of course teachers aren’t as beloved by the nation as nurses, but what also helped him in this action was the deferential nature of the teaching professional, i.e. teachers leave school and then go back to it and just do as they are told all the time. Nurses are different and, although they are in a similar hierarchical system, they know how to judge what is right and wrong and how to speak up. So in effect what Clarke did was ignore the workers and speak to the management and Lansley’s mistake was to view the nurses as the workers and the doctors as the management in only consulting them in the process. A professionally fatal error.

What we see in Lansley’s healthcare reforms is the culmination of a thirty year relentless march to the right of all the major political parties away from the true political centre. The Thatcher Government would never have dared even suggest the policy moves Lansley is trying to introduce, let alone consult over them (no matter how much it would have wanted to). But that was before Blair’s ‘Third Way’ and the deliberate blurring of the lines drawn between right and left.

Pre-Blair we all knew where we stood, we knew that putting the individual’s interests before the collective was ideologically right wing and vice versa for the left and we all lay somewhere on a sliding scale between the two. But the big trick of Blair’s Third Way was to sell us the lie that these terms were redundant, when they most certainly are not and never will be. The only reason for him introducing this notion was ideological and enabled him to introduce a seemingly endless program of right wing policies. If you doubt this and your memory is long enough then ask yourself this question: If the Third Way was meant to knit right and left, just how many traditionally left wing policies did Blair introduce? Now compare this with the right wing policies New Labour adopted during their tenure. What the Third Way did was normalize most people (who understandably pay very little attention to every day political moves in this country) to the notion that New Labour are a bunch of ‘lefties’ so how can they be a right wing administration? But the real problem with this was that all the time New Labour marched ever rightward, the party of opposition and eventual successor government was being pushed farther and farther to the right even than New Labour. This relentless homogenous movement of all political parties has had the drip, drip, drip effect on the national psyche of making us all sleepwalk into a right wing mindset that suggests even the traditional domain of the Tory Wets now appears left wing and is treated as loony lefty by the overwhelmingly right wing dominated print media and it is, I believe, the underlying factor that paralyses reformers in the Labour Party who want a re-aligning of all the main parties back towards the true political centre.

It has also become part of the national mindset that people won’t vote for anything even remotely left of the current centre. To which I would answer that we are approaching the point where more choose not to vote than actually do. I understand that many people are simply indifferent and choose not to take part, but I know there is a growing army of individuals (myself included) who have no choice of political party that could form a government to vote for. AV could be our only hope of re-engaging millions who are currently totally disenfranchised and it would at least make my vote count and is therefore a system that would encourage me to at least become re-engaged with the process. It would deliver governments that would be compelled at least to really listen to others and to take into account their interests and opinions and say goodbye forever to the two party Stalinesque version of democracy we have now with First Past The Post, which means we get one vote, one day in five years that always results in a government that is elected by a minority, but which rules dictatorially and virtually unaccountably for the next five years.

The Alternative Vote or First Past The Post? Vote HERE!

Do you have confidence in Andrew Lansley and his NHS reforms? Vote HERE!