Angry Lloyds customers were outside today's AGM cutting up their cards in protest against 'back to business as usual' at the bank. They are part of Move Your Money, a new movement calling on depositors to leave the 'too big to fail banks'.

This year Lloyds share price has dropped by nearly 50% and the bank is yet to resume paying dividends. Yet shareholders were largely supportive of the motions proposed at the AGM. This contrasts sharply to last year when over 20% of shareholders voted against the remuneration report.

"Todays AGM shows that its back to business as usual at the bank. The broad support of shareholders on all fronts show that we cannot rely on a 'shareholder spring' to hold the big banks to account or achieve meaningful financial reform. Its up to depositors to take a stand by moving their money out of big banks like Lloyds."

Lloyds, which is 40% owned by the taxpayer, announced pre-tax profits of Â£288 million for the first quarter. It also announced that it is setting aside a further Â£375 million to cover PPI claims, bringing their total compensation pot to Â£3.8 billion pounds.

Gavin Thomson, 28, a copywriter from Glasgow moved his money out of Lloyds and cut up his card outside of the AGM today:

"We know this AGM will vote to pass massive pay packets and bonuses, that are unrelated to success or failure. They will not vote to stop investing in torture, or weapons, or risky investments that brought our economy to brink. We are here at this AGM to say that there's only choice: we have to move our money.”

Iain Barrie a 40 year old IT contractor is also leaving Lloyds and cutting up his card:

“I’ve been with Lloyds for years but I’ve decided to leave because it’s clear that the financial crisis hasn’t taught them anything. They don’t value their customers or care about their impact on wider society. As taxpayers we are all shareholders but the only way we can make our voices heard is by leaving the bank.”

Move Your Money UK a new campaign encouraging people to move their money out of ‘too big to fail’ banks and into ethical, local and mutual alternatives. The campaign estimates that over the past 2 months over 5000 people have moved their money and thousands more have pledged to do so online.

Over the coming months Move Your Money UK will be working with credit unions, campaign groups, and unions in schools and universities and workplaces to encourage people to move their money.

“I support Move Your Money’s aim to raise awareness of socially responsible financial providers that pursue an agenda of responsible capitalism.” 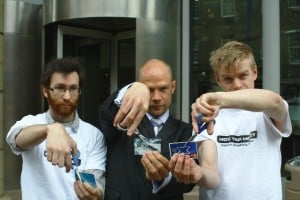 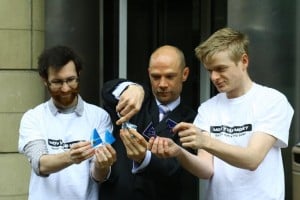 For more information about Move Your Money UK visit www.moveyourmoney.org.uk orÂ find them on Twitter @MoveYourMoneyUK or Facebook at http://www.facebook.com/MoveYourMoneyUK