Annual CPI Inflation up to 2.9%

According to the latest release from the Office for National Statistics (ONS), the annual Consumer Prices Index (CPI) inflation rate for August 2017 was 2.9 percent. This is up from 2.6 percent in July.

The ONS reports that the main drivers behind the increase between July and August were the rising prices of clothing and motor fuel.

Although the cost of air fares also increased slightly, because it was a smaller rise than the same time last year its effect was actually an offsetting downward pressure on inflation said the ONS.

When taking home owner/occupier costs (OOH) into account, the inflation rate of CPIH was 2.7 percent, a marginal increaser from 2.6 percent in July.

The CPI inflation rate of 2.9 percent is just short of the three percent point, which would trigger the need for the Governore of the Bank of England to write and explanatory to the Chancellor of the Exchequer. 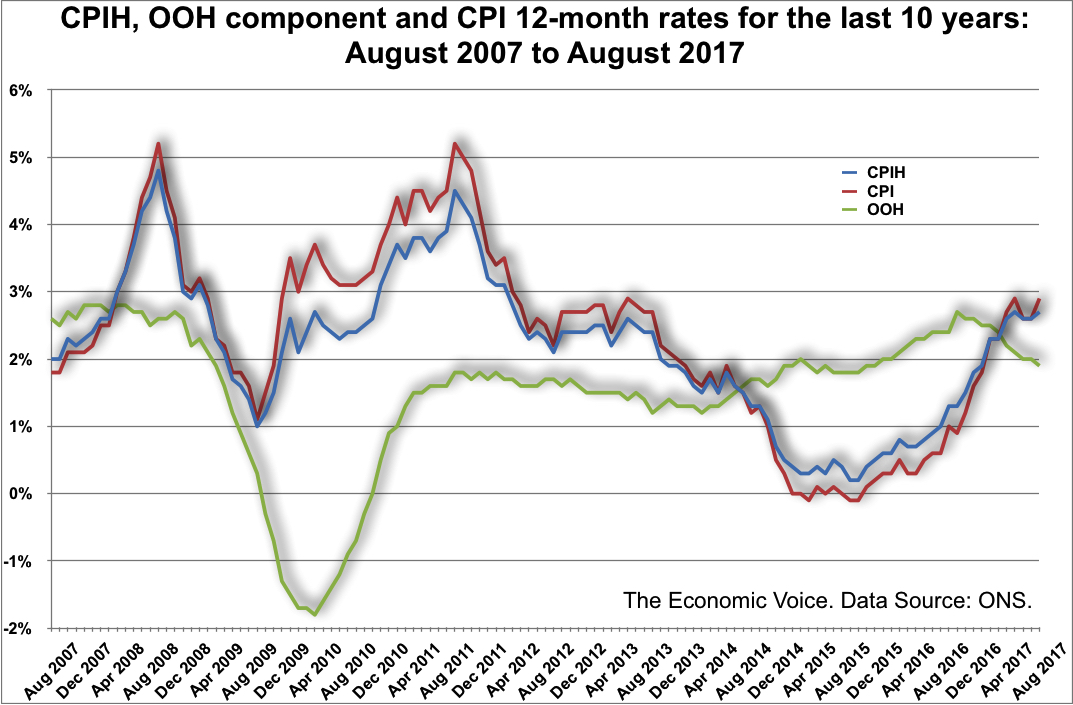 “The continued rise in inflation will come as further bad news for working families; who after 7 years of Tory economic failure have seen their wages fail to keep up with prices.

“During a week in which we have so far seen the Government send mixed messages on their public sector pay freeze, and their chaotic handling of Brexit, they still have no answers to the squeeze on incomes that working households are facing; yet Philip Hammond still plans to handout over £70 billion in tax giveaways to big business and the super-rich over the next five years.

“Only a Labour government will protect the living standards of working people by bringing in a Real Living Wage of £10 per hour, and an immediate end to austerity spending cuts."

"Rising inflation shows how urgent it is to address the sense of unfairness around the pay cap.

"With these numbers our nurses, teachers and other public sector workers will experience a 2% pay cut in the coming year. This will only aggravate the recruitment and retention crisis we are facing.

"The government must take urgent steps to lift the pay cap for all public sector workers, and increase wages in line with inflation."

“The larger-than-expected rise in UK inflation in August has thrown the spotlight back on the UK interest rate debate.

“Headline consumer price inflation jumped from 2.6% to 2.9% last month, while the core rate rose from 2.4% to 2.7%. It is the latter that may especially concern the Bank of England as it provides an indication of underlying price pressures.

“Clothing and footwear prices went up by over 2% last month, likely helped by the fall in the pound.

“The Bank of England meets this Thursday to set monetary policy. Judging by last month’s vote, two members of the Committee are already minted to support an immediate rise in interest rates. It will be interesting to see whether any other members may do likewise given today’s reading.

“On balance, we think that Brexit uncertainty will continue to trump inflation concerns, and rates will remain on hold for now – but the risks are shifting.

"This latest rise in inflation – to just under 3% – is not a great surprise. The weakness of the pound since the Brexit vote last year is continuing to feed through into higher prices in the shops and online. Clothing and footwear prices are up by 4.6%, the biggest increase for at least a decade. Goods prices in general are up 3.1% on a year ago, the biggest annual rise since the spring of 2012.

"With the pound continuing to struggle on the foreign exchange markets, it is likely that this surge in inflation has further to run and will take CPI inflation to over 3 percent later this year. With very well-developed and complex supply chains, it can take a number of years for a decline in the exchange rate, which raises import prices, to feed through fully to consumers.

"This suggests that the recent squeeze on consumer spending from higher inflation will continue to dampen growth in the UK economy in the second half of this year and next year. There is not much sign yet that consumers will get any early relief from the surge in inflation following the Brexit vote last summer."

“The CPI print for August surprised on the upside with YoY figure coming in at 2.9%, against the consensus forecast of 2.8%. Interestingly, the core CPI figure was also higher than expected at 2.7%, suggestion some of the pass-through effects of the fall in the currency impacting non-core goods and services. Post release of the inflation data, Sterling has rallied strongly against both the Euro and US Dollar, suggesting that the market is looking for a reaction from Thursday’s MPC meeting. The BoE has shown patience with above target CPI prints, however some reduction in the dovish bias and a move towards a more neutral or even a few hawkish comments is currently expected by the market.”

This rise means the self-employed and others across the UK will continue to feel the squeeze as earnings fall further behind the cost of living. Increasing fuel costs will also be a significant blow for the many self-employed people who have to commute long distances to work. And with the cost of train tickets rising to an even higher rate, they will be left with no choice but to take the hit from rising petrol prices.

“It’s not just transport either. A separate report released on Tuesday showed that overall input costs rose by 1.6% in August, while output prices rose 0.4%. These high figures are putting mounting pressure on self-employed people, who – unlike employees – need to purchase their own professional equipment.”

TheCityUK responds to the Prime Minister's speech at Davos

Fox news and CNN drop a clanger on ObamaCare ruling