September’s House Price Index form the Nationwide Building Society shows that house prices increased by 3.8 percent in the year to September 2015 and by 0.5 percent in the month of September.

This latest annual house price growth is up on the 3.2 percent seen in the previous month and the price of an average property is now £195,585.

Although prices are no longer climbing at the rate seen in the middle of last year (10-11 percent on the Nationwide’s figures), the rise still seems inexorable if a little more moderate.

London of course remains the most expensive region and also saw the strongest annual price change with an annual increase of 10.6 percent in the third quarter.

As you can see from the graph below, house prices are now well above their previous highs just before the credit crunch and subsequent price contractions. (Click on the graph to enlarge it.) 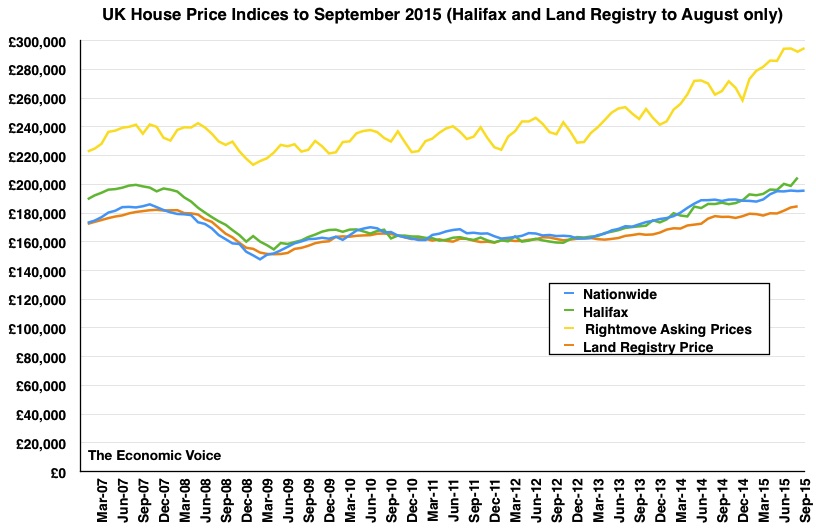 “UK house prices increased by 0.5% in September, with the annual pace of house price growth picking up modestly to 3.8%, from 3.2% in August.

“The data in recent months provides some encouragement that the pace of house price increases may be stabilising close to the pace of earnings growth. However, the risk remains that construction activity will lag behind strengthening demand, putting upward pressure on house prices and eventually reducing affordability.

“Indeed, in recent months surveyors have reported historically low levels of properties for sale and increased new buyer enquiries. Therefore it is unsurprising that most surveyors expect a pickup in house price growth in the months ahead.”

US Dollar boosted by jobs data and Euro takes another hit