The latest House Price Index from the Halifax puts the price of an average house at £204,674, a rise of nine percent over the previous twelve months based on the three months to August 2015 with the same period last year.

Looking at the graph below of the monthly house price information from the Halifax, the Nationwide, the Land registry and Rightmove asking prices you can see that they are all now higher than they were at their pinnacle just prior to the credit crunch.

Supply of housing remains very low says the Halifax with the stock of homes available for sale falling to another record low in July based on the Royal Institution of Chartered Surveyors (RICS) monthly report.

But mortgage approvals did rise increasing by three percent in July to the highest level since February 2014, according to the Bank of England.

At the end of the day, with an increasing population coupled with a woefully inadequate house building programme, this rise in house prices should come as no surprise. 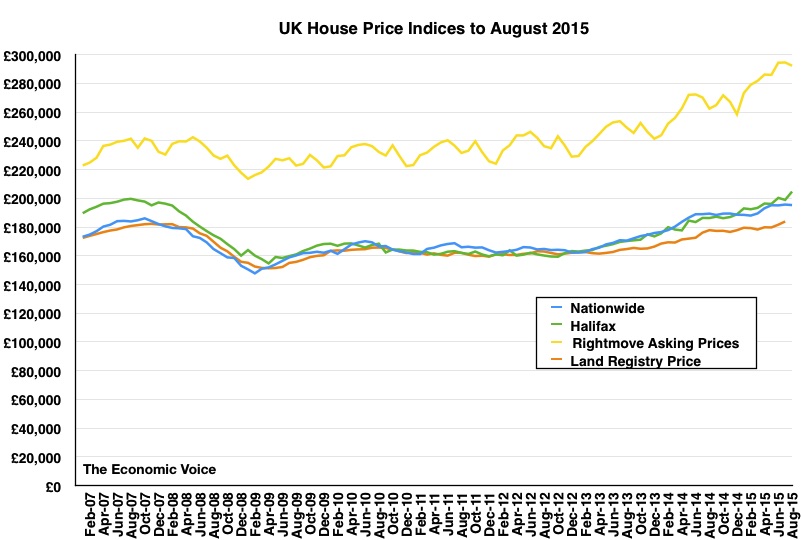 "House prices in the three months to August were 3.0% higher than in the previous quarter. This measure of the underlying rate of house price increased from last months 2.5% but remained below Junes 3.3%.

The underlying pace of house price growth is strong. The shortage of secondhand properties for sale on the market is resulting in upward pressure on house prices. At the same time, economic recovery, real earnings growth and very low mortgage rates are supporting housing demand. Strengthening demand and highly constrained supply are likely to mean that house price growth continues to be robust in the short-term."