Annual inflation remained at 2.7% in September

The Consumer Prices Index (CPI) increased by 2.7 percent in the year to September 2013, which is the same as the previous month.

The main upward pressure on inflation was from air fares says the Office for National Statistics with downward pressure coming from petrol and diesel prices.

The new measure of inflation that takes into account the costs felt by home owner-occupiers (CPIH) was also unchanged from August at 2.5 percent in September. The experimental RPIJ, a measure of the Retail Prices Index that meets international standards, grew at 2.5 percent, marginally down on August's 2.6 percent.

The Retail Prices Index (RPI) for September was 3.2 percent, again down on the August figure of 3.3 percent.

"The unexpected inflation rate of 2.7 percent year on year highlights the fact that price pressures remain, which then ignites the debate about whether above target inflation will be more stubborn and previously thought. The Bank of England has had a little more justification for its monetary policy stance lately, however the threat of high inflation will be a problem for the central bank who has committed to maintaining low interest rates.’"

Commenting on the RPI figure and its impact on business rate levels Katja Hall, CBI Chief Policy Director of the CBI said:

“This level of RPI could lead to another business rates hike in April.

“We already have one of the highest commercial property taxes of any EU country, so the Government must step in at the Autumn Statement to limit next year’s business rates increase at 2%.

“We then want to see a full review of the system to explore options for longer term reform.”

“With most Government benefits being linked to the CPI inflation outturn for September, today's inflation figures are key. At 2.7%, inflation came in some way below the OBR's 2.9% forecast published in the March Budget.

“This is good news for the Chancellor, as it implies that the government's current expenditure bill will be somewhat lower than the OBR expects. For example, the terms of the triple lock, which guarantees that state pensions will increase by the higher of inflation, average earnings or a minimum of 2.5%, mean that today’s figures will see state pensions rising by 2.7% rather than 2.9%. This is because wage growth is not going to be anywhere near this figure, and it is higher than the 2.5% floor.  This is on top of the government restricting the increase in some benefits to just 1%, regardless of the inflation figure.

“Inflation most likely peaked this year at 2.9% in June and will probably continue easing over the next few months. Petrol prices have eased significantly since last month, and other base effects from energy prices and food are likely to push inflation to around 2.4% in October. Although inflation is still running well above wage growth, the gradual easing should help reduce the squeeze on household finances. The consumer confidence survey already shows that they are finding it easier to make ends meet.

“Nevertheless, we see inflation remaining above the 2% target in the foreseeable future. Accounting for the persistence of higher inflation in administered & regulated prices and the end of deflation in imported goods prices, inflation will probably settle at around 2.2% in 2014 and 2015. But this is still some way below the Bank of England's 2.5% inflation knockout, so the Bank can continue to focus on getting unemployment down below 7% and keeping rates at 0.5% until at least mid-2015.” 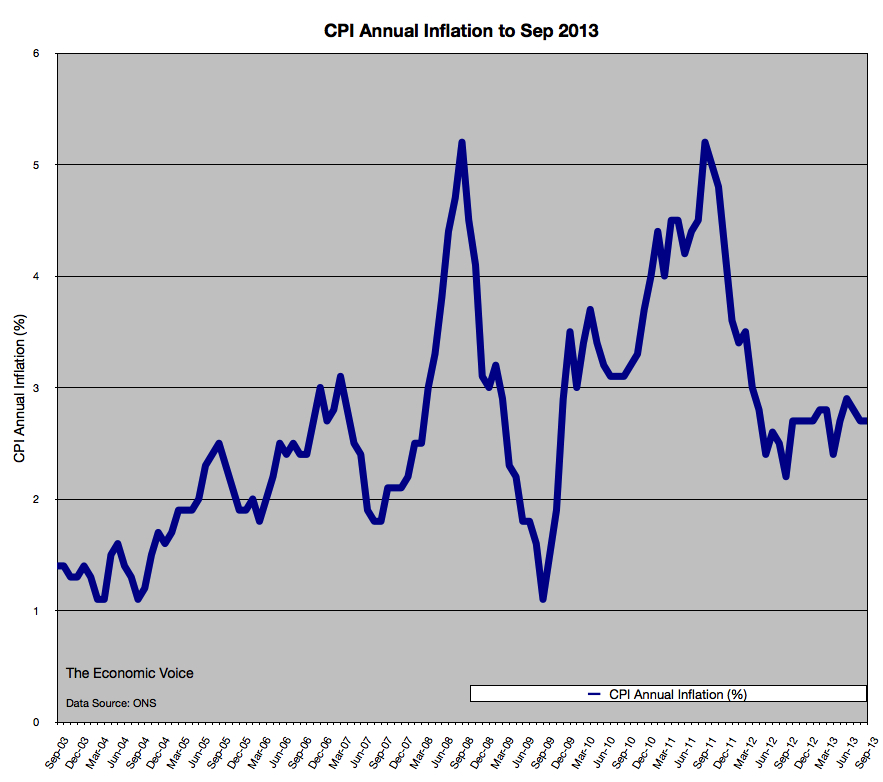