There was no one message coming from the annuity providers in October with some rates being held, some falling and some rising (see snapshots below).

RPI Linked annuity changes were also inconsistent over the month.

Standard Life cut their rates by between 2.1% and 4.3%, Legal & General cut rates by between 0.4% and 3.8%, Canada Life left single life rates the same but cut joint life rates by 3.8%. Meanwhile Aviva increased their rates by up to 4.2%. As a result of these changes, Legal & General replaced Standard Life at the top of the single life table with an annual income of £3,047.40, although this is £23.40 less than they were providing a month ago. Standard Life remains top for joint lives with an income of £2,642.40 with Legal & General in second place with an income of £2,578.80. Canada Life and Aviva remain in third and fourth places respectively.

Reliance Mutual reversed their big increases in September by reducing rates by about the same amount – between 3.3% and 4.1%, thereby dropping from first to fourth in the joint life tables.

Legal & General, who were not in the top four last month, are now providing the best single life rate for a smoker at £6,624.48 per annum, followed by Just Retirement on £6,451.80 an increase of 1%. LV= dropped to third from first, following a 3.5% rate cut with an income of £6,267.00. For joint lives, Scottish Widows have dropped out of the tables being replaced by Legal & General, who jumped straight into second place with Just Retirement taking over first place from Reliance Mutual, providing an income of £5,786.76 for a male aged 60 and a female aged 57, although this is less than Reliance Mutual was offering last month.

(All rates based on £100,000 Purchase Price, no guarantee period, payable monthly in arrears)

Richard Williams, Director at The Annuity Bureau from JLT comments:

"The market movements during October were inconsistent between the providers, so if an individual has had an annuity illustration within the last month they should get this updated to make sure that they are still getting the best rate. If they are using an adviser they should check that they have the most up to date figures and continue to shop around." 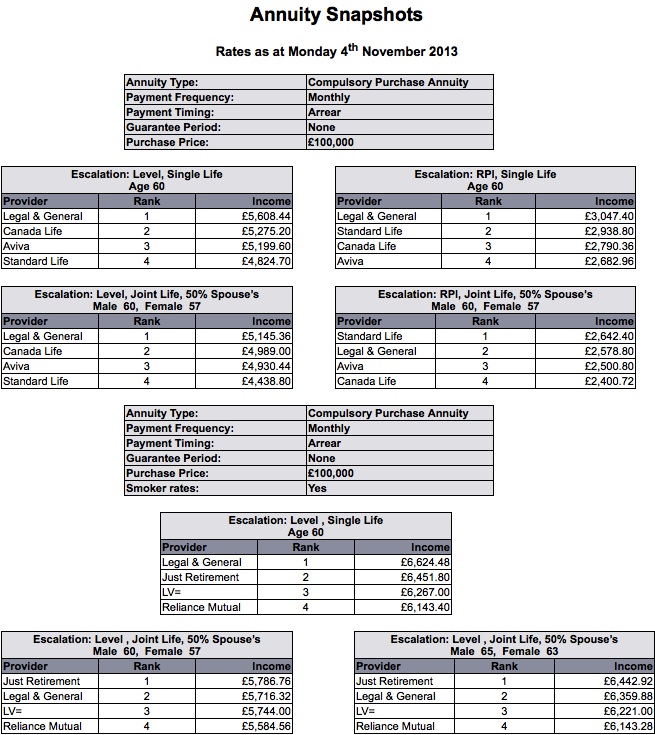 For more information on the latest annuity rates or retirement services please contact The Annuity Bureau on 0845 850 8550 or visit www.annuitybureau.co.uk.