• Average annuity rates have increased by a record 6% in the third quarter of 2013, the biggest movement in rates since 2009

• Index reveals a gulf in rates, with the best enhanced rate 38% higher than the worst standard rate

The latest MGM Advantage Annuity Indexhas revealed annuity rates have increased by 6% in the third quarter of the year, the largest quarterly increase since the Index launched in August 2009. Overall, rates are up by 12% since January, helping annuity rates to recover to a two-year high.

The retirement income specialist has also revealed the gulf between the best enhanced annuity rate and worst standard annuity rate is around 38%, meaning many people with health or lifestyle conditions could be missing out on thousands of pounds of income. Up to 70% of people at retirement could qualify for a better rate because of a health or lifestyle condition, and yet only 6% of consumers who purchased an annuity in the second quarter of the year without advice purchased an enhanced annuity (this compares to 45% when advice is provided or people shopped around).

Aston Goodey at MGM Advantage comments: "Annuity rates have had a really bumpy ride, but we have seen a steady improvement this year with rates hitting a two-year high, largely driven by the returns available on bonds and gilts. This is great news for people looking to generate a retirement income, although it will always pay to shop around for not only the right shape of income but also the highest rate.

"The data shows a chasm between the best enhanced rate and worst standard rate. This is important, as although 70% of people facing approaching retirement could qualify for a higher rate, only 6% bought an enhanced annuity in the direct market in the second quarter of the year. This shows the industry still has a long way to go toimprove customer outcomes by providing the education and information required to ensure consumers get the right deal for their individual circumstances."

The average annuity today would pay 11% more income than the equivalent annuity purchased a year ago, or £6,111 additional income over retirement.

Commenting on the outlook for annuity rates, Aston Goodey said: "The increases we have seen this year need to be viewed relative to the record lows of 2012 and the overall trend of a decline in rates. The pressure on rates will continue due to SolvencyII, improving longevity and low returns on gilts and bonds,all of which will dampen down a recovery of rates in the near term."

Chart below shows the decline in conventional annuity rates since November 1991, when rates were over 14%. Today the equivalent annuity rate is around 5.8%. (Click on the chart to enlarge it.) 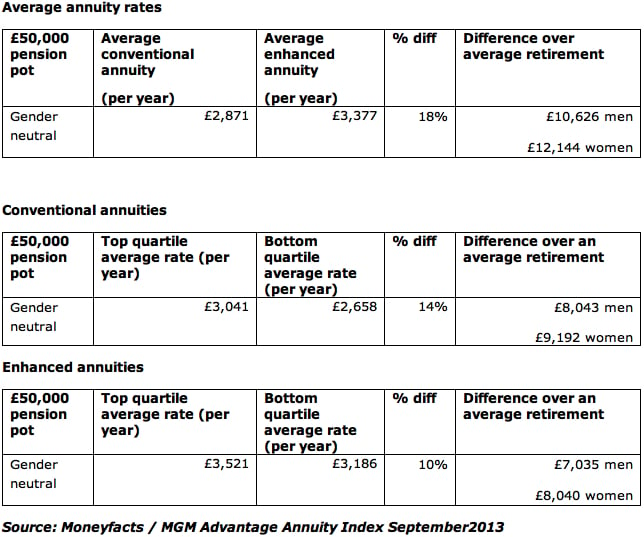 The Most Profitable Gas in the World