Antibiotic resistance “has the potential to undermine modern health systems,” argue health economists Richard Smith and Joanna Coast on bmj.com today. They believe that an increase in resistant organisms coupled with a big fall in the number of new antimicrobial drugs “suggests an apocalyptic scenario may be looming.”

Their warning comes as the Chief Medical Officer launches the UK’s Antimicrobial Resistance Strategy and Action Plan, reflecting the need for a clear change in our understanding of and response to antimicrobial resistance by the public, NHS and government.

Current estimates suggest that antibiotic resistance is a relatively cheap problem, they write, but such estimates do not take account of the fact that antimicrobial medicines are integral to modern healthcare. For example, antibiotics are given as standard to patients undergoing surgery, to women delivering by caesarean section, and to those having cancer treatment.

“From cradle to grave, antimicrobials have become pivotal in safeguarding the overall health of human societies,” they write.

Although it is difficult to forecast the likely economic burden of resistance, they believe that even the highest current cost estimates “provide false reassurance” and this may mean that inadequate attention and resources are devoted to resolving the problem.

For example, current infection rates for patients undergoing hip replacement are 0.5-2%, so most patients recover without infection, and those who have an infection have it successfully treated. But the authors estimate that, without antibiotics, the rate of postoperative infection could beÂ 40-50% and about 30% of those with an infection could die.

While they recognise that this is a simplistic analysis, they say “we use it as an example to illustrate and provoke, to emphasise the point that infection rates and their consequences in terms of health service costs and human health may be unimaginable.” 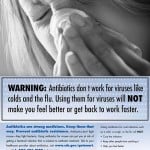 A change in culture and action is needed to plan for a future with more antibiotic resistance, they conclude. “Waiting for the burden to become substantial before taking action may mean waiting until it is too late. Rather than see expenditure on antimicrobial policies as a cost, we should think of it as an insurance policy against a catastrophe; albeit one which we hope will never happen.”

In an accompanying editorial, Professors Anthony Kessel and Mike Sharland say the new UK Five Year Antimicrobial Resistance Strategy and Action Plan “represents an important step in both recognising and responding to this significant threat.”

The problems are global and the terminology complex, but the importance is clear, they write. “A fundamental standard of the NHS should include basic high quality routine infection control and clinical care, as noted by the Francis inquiry. These standards of care are crucial to the prevention and control of all healthcare associated infections, including multi-drug resistant Gram negative bacteria."

Funds – to track or not to track