App meltdown is latest IT disaster for RBS

Thursday morning saw RBS's computer systems in meltdown again, as the bank's latest error saw customers unable to access their accounts for theÂ third time in 9 months. Thousands of UK customers took to social media reporting problems with their mobile banking apps as of 9am on Thursday 28 March.
Laura Willoughby of Move your Money said:
"Coming just weeks after the last IT failure, this really is the last straw for customers fed up with such unhelpful banking. RBS is not only too big to fail, but too big to provide proper customer service as well."
"A third IT meltdown in only 9 months is absolutely unforgivable. How can RBS inspire confidence in its banking activities when its IT platform crashes so often?"
Social media channels were filled with furious customers of RBS, NatWest and Ulster Bank, who reported problems getting access to their accounts, paying their bills, and transferring money.
In June 2012 RBS and its NatWest and Ulster bank subsidiaries suffered a chronic and sustained IT meltdown affecting the majority of retail banking clients across its 7.5 million UK customer base, seeing customers locked out of accounts with transactions and withdrawals in disarray for up to a week. Last years failures were widely attributed to a decision by RBS to outsource its IT department to India, resulting in the loss of 1600 skilled UK jobs. [1]On 7 March 2013 RBS' systems went down again, barely 9 months since the last crash. Many customers were left red-faced when trying to pay for meals or stranded with no transport, with thousands pledging to leave the bank due to its failings. [2]It remains to be seen if the current problems will be as prolonged as the 2012 outage which was reported to cost RBS £125m in customer compensation. As IT failures continued into a week, questions were asked whether RBS was infact facing a crisis of liquidity, forcing Mervyn King to publicly comment on the issue.[3]
Laura Willoughby added:
"This is a major error and it will be customers and UK taxpayers who lose out. If RBS, NatWest, and Ulster Bank customers have had enough of ridiculousÂ bonuses, tax avoidance and dodgy IT systems locking them out of their own accounts, theyÂ should switch who they bank with and tell the world why!" 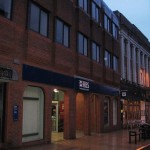 "Stephen Hester may be cursing bad luck, but once again this points at major operational and customer service failings at RBS. In 2012 he promised this would not happen again, but its happened twice since then. Its time the government fully nationalised RBS and re-tasked it to a social investment bank that lends to SMEs to get the economy moving again."

For customers fed up with being locked out and abused by RBS, there is at least some good news. There is a growing network of local, mutual, and ethical banks that provide a reliable and honest good service, whilst supporting SME's and investing in socially useful activities. Check out moveyourmoney.org.uk/where-can-i-move-my-money-to for further information. It's time to bank on something better.
Contact Move Your Money for advice on compensation for late payment and where to Move Your Money – www.moveyourmoney.org.uk
Image by Sebastian Ballard [CC-BY-SA-2.0 (http://creativecommons.org/licenses/by-sa/2.0)], via Wikimedia Commons