Following today’s announcement that President Obama has decided to nominate Janet Yellen as the next Fed Chairperson the team at Duncan Lawrie Private Bank take the view that, while the appointment will help to stabilise investor concern to a degree, it will do little to improve market sentiment in the short term until the two US political parties finish their “cliff-top tango” over budget discussions.

“The uncertainty over Ben Bernanke’s successor was starting to concern investors. While Yellen’s appointment seemed the obvious outcome following Lawrence Summers pulling out of the race in mid-September, with each day’s delay, the chance of a surprise candidate making an appearance seemed more likely.

“Investors can now begin to feel a sense of stability and security. Yellen is similar in her thinking to the incumbent Chairman and she contributed to the development of the “forward guidance” strategy which has subsequently been adopted by the UK and European monetary authorities. Her appointment is likely to represent a continuation of the current policy of low interest rates and as much stimulus as is required to keep the economy on track. This is a positive signal for global equity investors. 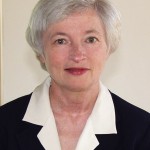 “Yellen has a reputation as a direct communicator. Whilst it may take a couple of meetings for the market to become accustomed to her style, more clear guidance will reduce the likelihood of slip-ups such as we saw in May, when US Treasury and UK Gilt yields spiked when the market was briefly convinced that the end of “tapering” would coincide with the first increases in interest rates. Bernanke soon poured cold water over this assumption, but Yellen may go further to make sure markets understand exactly what the Fed is thinking.

“Whilst the nomination announcement is positive in the longer-term, it may do little to improve market sentiment in the short term as the agenda is currently dominated by the ever-encroaching US debt ceiling, as well as on-going discussions relating to the US budget. The Fed is unlikely to begin to reduce its quantitative easing programme until these issues are resolved, not wishing to snuff out the glowing embers of economic recovery, before it has a chance to burn brighter.

“Once the Democrats and Republicans have finished their cliff-top tango, we believe attention in the US markets will turn back to the improving economy, and Janet Yellen’s key role in sustaining its momentum.”