After taking his first win of the 2015 at the previous round in Rovinj, Hannes Arch put himself firmly back in contention for the Red Bull Air Race World Championship with a second successive win at round four in Budapest, Hungary.

After some surprise early round results on the course laid out over the Danube river in the heart of the scorching Hungarian capital, Arch triumphed over championship leader Paul Bonhomme by just 0.207 seconds in a thrilling final round that also saw Czech pilot Martin Šonka claim a podium place for the second race in succession.

Arch had struggled during the training sessions but found his best form when it mattered most, advancing easily through the round of eight against luckless defending champ Nigel Lamb – who was again DSQd for going over the g-force limit – and then flying his fastest time of the whole week in the final, stopping the clock at 59.350 seconds. 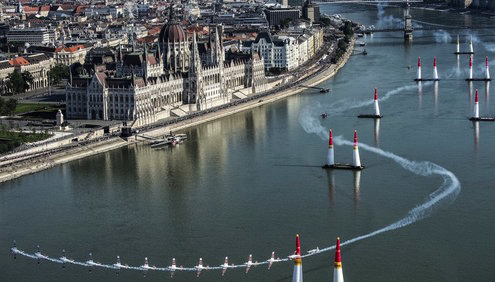 Flying directly after Arch and determined to make amends for failing to reach the Final 4 at the previous round in Rovinj, Bonhomme flew an extremely aggressive race to try and topple his Austrian rival but just didn't quite have the top speed of Arch. His clean run was enough to beat Šonka and Canada's Pete McLeod and give the Brit a welcome return to the podium.

With Australia's Matt Hall – the fastest man throughout the week and joint championship leader with Bonhomme coming into Budapest – surprisingly not making the Final 4 after being knocked out by Šonka, Bonhomme's second place gifted him a clear lead of the championship standings once again with 34 points. However, Arch's back-to-back wins have thrust him right into contention in the championship chase and he now sits in joint second place with Hall on 29 points, just five adrift of Bonhomme.

With the Red Bull Air Race World Championship now entering the second half, the battle is poised to be one of the closest ever in the coming months.

More than a third of kids in England are overweight/obese

With marriage it's the thrift that keeps on giving

Does government know best when it comes to our diet?

We must show children how to have fun with fitness, says Capre