The Arctic Monkeys have topped the US Billboard for alternative music for the first time ever with their single ‘Do I Wanna Know’ taken from their 5th studio album AM. The highest place the Sheffield band had previously reached was 7, back in 2006, with their debut single ‘I bet that you look good on the dancefloor.’ The band is currently in the midst of a sold out tour of the States, and have announced that they will be headlining at Sonic Festival in Japan this summer.

Back at home, AM has sold more than any of their previous four albums, and was their third Mercury Prize nomination. They have been nominated for two Brit Awards and are the highest nominated act at this year’s NME awards, alongside Austin, Texas. 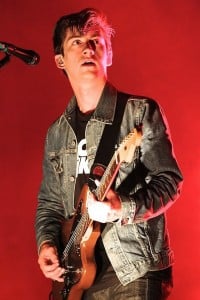 The band have been popular in the UK since they first started uploading videos onto YouTube in 2006. The time it took them to break America – a prize all British artists look towards – has been significantly longer than the likes of Mumford and Sons or the boyband One Direction. Today however, alongside the likes of Amy Winehouse and Adele, the band are considered one of the UK’s greatest musical exports.

As well as AM’s handful of award nominations, the record was also the most streamed album in the UK last year. In addition to this, despite a low year of album sales across the industry, alongside Beyonce and Davie Bowie the Sheffield boys were the most purchased artist on Amazon. AM is still a best seller on the site, discounts for which can be found at www.voucherbox.co.uk.

Though lead singer Alex Turner’s bullet mouth and sharp wit hasn’t faltered since 2006, the sound of their music has grown more sophisticated. The band swung wildly to the left with their third album Humbug, which though critically acclaimed fell on the indifferent ears of many fans of their first two albums.

The subsequent popularity of AM has pleased Alex Turner, partially because it means they can drop older tracks off their playlist. Talking to the Daily Star he said, "Sometimes it's tough to get through one of the old ones live. You know, you don't feel like that anymore.” Indeed, the title of the first album, Whatever People Say I Am, That’s What I Am Not, has a petulancy that is nowhere to be seen today.

Fans of the older classics shouldn’t be disheartened though, Turner suggesting that there is life in them yet: "When you tell the same joke 600 times, you won't hear what it is any more, but then sometimes, like, the 601st time you might see something in it you didn’t before."

The Raven is coming